Canadian Mining Co. To Sue Costa For US$1 Billion Dollars

In a statement Friday, the company said it plans to move forward with the case to the World Bank’s International Centre for Settlement of Investment Disputes (ICSID).

The legal battle between the Chinchilla administration and the Canadian miner began when the government cancelled the La Crucitas project in Cutris de San Carlos, in the province of Alajuela, following calls by environmentalists and local residents over environment and health concerns, resulting in a court cancelling the permit. 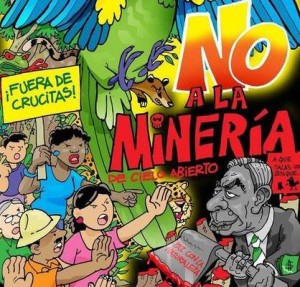 In 2008 Industrias Infinito, the Costa Rican subsidiary of the Calgary (Canada) based Infinito Gold, obtained a mining concession (by the Arias administration) for the 261-hectare project. The company says it has invested US$92 million in the project that it expected to have a profit potential of US$1 billion.

Costa Rica’s Environment Minister  has yet to comment on the Infinito announcement.

Earlier this year, the International Centre for Settlement Dispute dismissed Infinito’s $1 billion claim against another Latin American government. Venezuelan officials confiscated the company’s Las Cristinas mine in 2001, sparking a 10-year battle between the government and the Canadian company.