Three years is the prison sentence handed down to former legislator Maureen Ballestero Vargas for personal use on two separate occasions, airplanes of the Ministry of Security. However, the former PLN legislator won’t see a day behind bars. 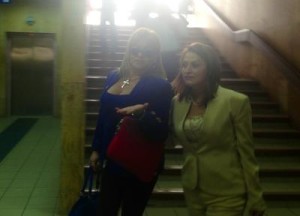 The sentenced was handed down by the judge Hugo Porter of the Tribunal Unipersonal de Hacienda (Ministry of Finance Court), but commuted to conditional release as long as the former legislator does not commit any other criminal offences during the three years.

In addition, she is disqualified from holding public office for a period of three years and promised to pay to the State US$1.190 dollars plus ¢1 million colones (US$2.000) in civil suit damages.

In the same proceedings, Natalia Chaves Ballestero, daughter of the former legislator, is to perform 120 hours of community service at the National Police Academy, sanction for the crime of embezzlement when she travelled with her mother on one of the flights.

Judge Porter warned Chaves that she must spend the community service hours personally at the Police Academy and not by electronic means.

The flights taken by Ballestero where on September and October of 2011, while she was a legislator. The first flight was on September 5 of that year, when she requested an airplane and pilot from the Ministry of Security to travel to Liberia, Guanacaste, for a personal meeting. On October 11, she again requested a flight to attend yet another political meeting.