TODAY PANAMA –  AN INTERPOL Red Alert was formally issued on Monday, May 22 at the request of the Supreme Court of Panama for the location and arrest of former President Ricardo Martinelli. 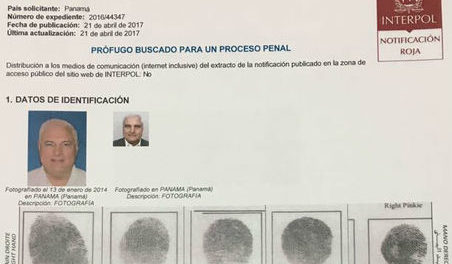 The court is investigating Martinelli for the illegal interception of communications by the National Security Council during his government (2009 -­2014).

An Interpol Red Alert was formally issued on Monday at the request of Panama’s Supreme Court for the location and arrest the nation’s former president, Ricardo Martinelli.

The information was confirmed Monday by the National Police, and Martinelli is now officially a wanted man.

On Dec. 21, 2015, the plenary of the Court ordered the provisional arrest of the former president. According to the plenary, the decision was based on a decision by Judge Jerónimo Mejía after Martinelli failed to appear at a hearing in December.

“The absence of Martinelli prevents the development and completion of the process,” said the ruling.

Martinelli was declared “in default” by Mejía at the hearing. On the same day, four applications for provisional detention were filed: one by prosecutor Harry Díaz and the other three by attorneys.

If found guilty, he would face up to 21 years in prison.

A  red alert for Martinelli’s two sons has been in place since February. They face charges of money laundering in connection with alleged bribes from Brazilian construction giant Odebrecht.