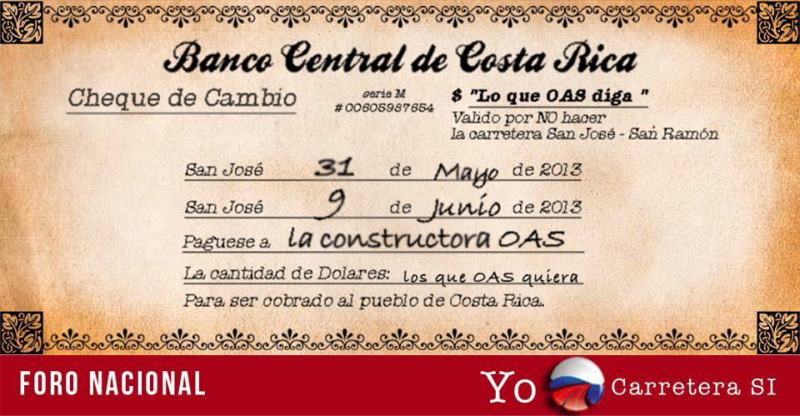 (Elpais.cr) – The legal team of the Foro Nacional announced it will file suit with the Tribunal Contencioso Administrativo (TCA) to prevent the government of Laura Chinchilla to pay US$45.9 million dollars to the Brazilian company OAS, for work it has not performed.

Álvaro Sagot Rodríguez said that the legal team has agreed to file several motions, seeking an injunction to prevent the government from paying or signing a settlement agreement.

On Friday, OAS said it will seek payment of US$45.9 million dollars to cancel the concession contract it was awarded for the (re)construction of the San José – San Ramón road.

The company justifies the amount by saying it is the amount out of pocket for the process of obtaining the contract, which the government unilaterally cancelled.

The Foro Nacional will be holding a meeting this afternoon in San Ramón to discuss the situation, with more meetings in the week in Naranjo, Palmares, Zarceo, San Carlos and Esparza. It does not rule out participation of other organizations from different areas of the country.

“While criminal proceedings are considered secret, what is known is that two payments were made by OAS, one of several millions to increase the cost of the work, which current Transport minister, Pedro Castro, was involved and the other of three million dollars which a former minister received a share”, the Foro charges on its Facebook page.

For Rodriguez, “the OAS concession contract is void and consequently therefore there is no obligation to pay any damages”.

The lawyer, “citizens must be ready to speak out publicly, with civil disobedience, for the public has had its rights violated”.

In April the government of Laura Chinchilla, after public outcry, put an end to the concession contract it has awarded to OAS. The Presidenta, days ahead of the visit by U.S. president Barack Obama visit, announced the cancellation on national television. The move, many say, was to quieten the unrest that was brewing ahead of the Obama visit.

In consequence, the government sent OAS a cancellation letter. OAS responded to the letter on Thursday, advising the government of Costa Rica the amount it wants to put the contract to an end.

Despite negotiations between the company and the Government, the Foro Nacional on Friday insisted that the payment should be withheld, and administratively and criminally prosecute those involved in the approval and signature of the concession contract of the road with Brazilian transnational.

- Advertisement -
Paying the bills
Previous articleChina Looking At New Digs For Embassy
Next articleJohnny All Set For the Presidential Elections!