The Fuerza Publica, the national police force of Costa Rica, is stepping up its vigilance in Guanacaste. Increased foot patrols, strategic operations and good community relations have resulted in the arrest of several suspects allegedly involved in drug dealing, poaching, robbery, and smuggling. Population growth and enhanced foreign investment in Guanacaste call for increased security, and Fuerza Publica is responding accordingly. 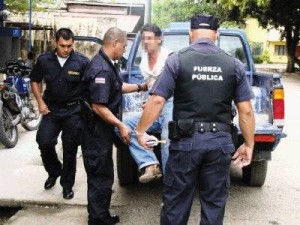 For many decades, Guanacaste was known as the “forgotten province” of Costa Rica.

While communities along the Central Valley and the port cities of Puntarenas and Limon flourished, Guanacaste languished due to its remoteness and water shortages. In the 21st century, however, Guanacaste has become one of Costa Rica’s most prosperous provinces.

Tourism and real estate are the main drivers of prosperity in Guanacaste, but there is also a burgeoning aerospace and scientific industry provided by research at EARTH University and engineering at the Ad Astra Rocket Company in Liberia, which are two of Costa Rica’s finest enterprises. There is no doubt that a lot of wealth and high quality of life have been created in Guanacaste, and Fuerza Publica is committed to preserve the peace in this province.

Fuerza Publica’s efforts in building community relations in Guanacaste is already paying off. In early September, officers received a tip about street drug peddlers operating in Santa Cruz. Two suspects fled upon being approached, but the officers already knew about their modus operandi in this regard and thus they waited for them to appear at the Municipal Market and Barrio Limon. The suspects were found in possession of marijuana and cocaine.

As previously reported by the Costa Rica Star, officers from the Fifth Regional Directorate found themselves in an armed standoff after they surprised illegal hunters in the Guanacaste National Park. The incident occurred while officers accompanied members of the Ministry of the Environment as part of a joint patrol strategy.

Fuerza Publica is also working with the Border Police and the National Coast Guard Service of Costa Rica in Guanacaste. In late July, Coast Guard and Fuerza Publica officers apprehended four camouflaged men carrying shotguns, revolvers and Chinese-made AK-47 assault rifles. In the beginning, there were concerns about a border militia being formed, but that was not the case. Two of the suspects were from Nicaragua, and officers believe that they were part of a drug smuggling network waiting on a beach drop.

Earlier this year, Drug Control Police (Spanish initials: PCD) officers dismantled an alleged drug dealing operation run by three relatives who operated too close to the school in Playas del Coco. Members of the Tourism Police of Costa Rica, a special unit of bilingual officers sworn to protect one of our country’s most valuable resources, received the complaints and organized a surveillance operation. Intelligence was passed on to the PCD and a raid was carried on.

As communities such as Playas del Coco, Tamarindo Beach and Liberia continue to grow and prosper, Fuerza Publica will continue to protect residents and tourists alike. Guanacaste will never again be forgotten.