The “Platina”, A Costly Repair Job As New Contractor Tackles The Problem 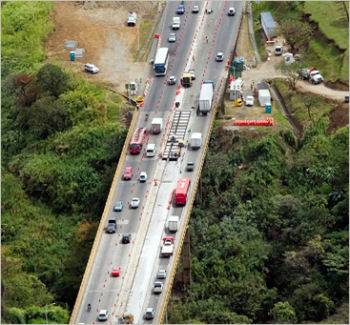 How long does it take to fix a bridge in Costa Rica? More that five years and counting. And a sh*t load of money, more than ¢7 billion colones at last count. 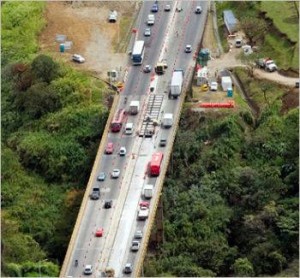 That is the story never ending story of the “Platina” bridge, the bridge over the Virilla river on the autopista General Cañas as it is referred to.

Anyone living, visiting or even having a slight interest in Costa Rica knows about the ‘platina’ bridge. It’s been in the news online, print and television – and the subject of mockery – for half a decade.

The bridge is much more than a road structure, it has become a drain on the country’s poorly managed financial resources and shows the weakness of an administration that cannot fix the problem.

It was way back in 2009 when it was first detected, a gap in between the spans of the bridge. Since, it has been welded, cemented, metal grates placed across its surface and still the problem persists today. And no real solution is in sight. Well maybe.

Yes, the Ministerio de Transports y Obras Publicas (MOPT) has a new contract. MOPT minister, Pedro Castro, who was part of the initial failed solution and then inherited the problem from the two ministers who preceded him, says the new contract is for ¢4.5 billion colones an will take 13 months to complete.

The new contractor will be ready to start work in two weeks and says will take thirteen months to complete, of which only one – the last one – will affect traffic with partial closures.

The total cost so far for the bridge repairs is ¢7.1 billion colones.

The last time any major work was done on the bridge was back in February 2011, when within days of the “completion” of the repairs, the concrete between the newly installed grates began to crack.

Since, work crews have made nine repairs for different problems, leaving the most transited highway in the country with a bridge full of patches and a deteriorating infrastructure.