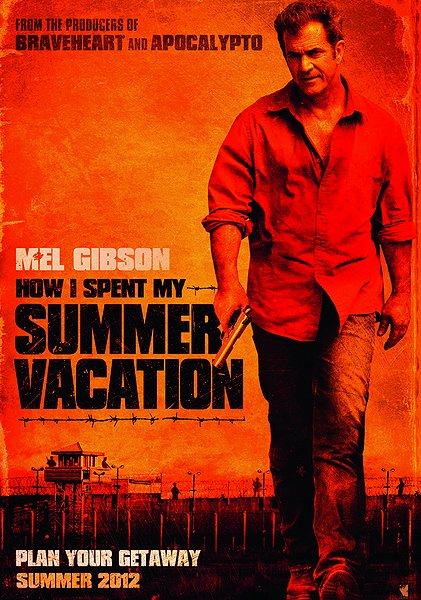 Get the Gringo, written by and starring Mel Gibson, is perhaps the best movie ever made to miss a real theatrical release. Some call it the Best Straight-to-DVD Release ever.

Released in the US last year, the flick is making to screens in Costa Rica this Thursday (Jan. 10). Could it have something to do with Mel owning property in Costa Rica? Or his regular visit to Rohrmoser when Oscar was in Casa Presidencial?

In any event, if you haven’t seen it, here’s what your are in for, from a compilation of several online reviews.

“I know that sounds like damning the movie with faint praise, but Get the Gringo is a surprisingly professional, polished movie. The catch, however, is that each person’s ability to sit through it will depend on his or her ability to stomach watching Mel Gibson on film. In fact, I suspect the only reason Get the Gringo was dumped off without a theatrical release is because of the star. I grew up watching (and loving the hell out of) Lethal Weapon, Braveheart, and The Road Warrior, though, so the man can do nothing in his personal life to make me just skip out on one of his action movies. I may not like Gibson as a man, but he knows how to make a decent movie. Get the Gringo is a grim, bloody, taut little film, reminiscent of Gibson’s work in the ‘80s, before he briefly attempted to go all family-friendly on us.

The movie gets off to a strong start, throwing the viewer right into action: the film opens on a car speeding through the desert, police cruisers in hot pursuit; the driver and backseat passenger of the vehicle are both wearing clown masks. The passenger, perhaps in a parody of the opening of Reservoir Dogs, is bleeding all over the backseat. Through sardonic, gravelly narration provided by Gibson, we learn that he’s the driver, he’s just pulled off a big score, and he’s headed for the border. Unable to find an opening, he crashes his car right through the fence separating the Mexican and U.S. borders, and finds himself at the mercy of Mexican law enforcement.Seeing that Gibson has two million dollars stashed away in the backseat of the vehicle, it doesn’t take long before the dirty cops abscond with his money, leaving him to rot in El Pueblito, an overcrowded detention center that has less in common with a prison and more in common with a slum. Of course, Gibson happened to have stolen the money from a ruthless gangster played with sleazy relish by Peter Stormare, and of course Gibson is going to cut a bloody swath of revenge to his money while defending himself from assorted gangsters and hit men.Early scenes in which Gibson’s nameless career criminal manipulates his way up the prison food chain through lying, robbery, arson, and other unsavory conduct turn out to be the highlight of the movie.

Gibson’s character here is one of the most unabashedly antisocial, maladjusted anti-heroes in recent memory and pleasantly reminiscent of some of the characters he played during his glory years.Along the way, the movie loses some of its edge as Gibson picks up a stray kid (Kevin Hernandez) as a sidekick, and the film ceases to focus on its lead. To co-writer and director Adrian Grunberg’s credit, however, he keeps the relationship between the career criminal and the kid from becoming too sentimental. There’s no touchy-feely bullshit here, thankfully, and the movie doesn’t ease off of its hard R-rated tone when the boy shows up. The dynamic between the two is less like that of Indiana Jones and Short Round in Temple of Doom and more that of an unrepentant sociopath grooming an impressionable accomplice.Oh, and there’s plenty of good ole fashioned blood and gore. Plenty of gangsters are tortured, gunned down, and blown up as everyone scrambles for the cash and under Grunberg’s capable direction, the actions sequences of Get the Gringo are well choreographed, sharply edited, and refreshingly comprehensible.The film mostly suffers from being tonally uneven; when Gibson is on the screen, Get the Gringo plays like a black comedy, but when he disappears, the proceedings take an unfortunately melodramatic turn. Get the Gringo occasionally stops and starts as the story spins off into a muddled subplot involving the kid and his attempt to avenge the murder of his father at the hands of a cartel gangster, but it regains its footing with a climactic, high-octane gun battle in which Federales face off against armed prisoners with Gibson’s conman caught in the middle.I recommend Get the Gringo to anyone who can at least tolerate Mel Gibson these days; and I’m passing no judgment on those who can’t stand the man except to say that if you hate Gibson, nothing here is going to make you like the movie. Get the Gringo is a vehicle for Gibson’s talent for better or worse. Still, I feel that this movie deserved a limited release at the least, and all other things being the same, if the film had starred George Clooney instead, I believe it would have ended up being one of the more praised action comedies of this summer.

“It can’t be an accident that Mel Gibson’s most recent films — 2010’s Edge of Darkness, 2011’s The Beaver, and now Get the Gringo — are unflinchingly dark. Now, it’s impossible and reckless to attempt to tie those films to Gibson’s very public problems of the past decade; in fact, any real filmic response on his part to his personal breakdowns would likely be an obsequious comedy designed to recapture some of the charming smugness he brought to the movies that made him a star in the first place. No, these movies are grim for grimness’ sake, as if he’s desperate to do anything and everything to break from those old roles and try something new. Maybe it was evident in 1999’s Payback (a spiritual prequel to Get the Gringo), or in the way Gibson’s directorial work returned time and again to physical disfigurement and sacrifice: the scarred, sexually confused/-ing man without a face giving way to martyrs like William Wallace and Jesus Christ, then finally all-out tribal warfare revolving around ritualized killing. Gibson, it would seem, is drawn to these awful places more than we’ve ever liked to admit.

From Rotten Tomatoes that gave it a 80% rating:

Mel Gibson finds new life in a Mexican jail after getting caught at the border with $4 million dollars of Mobster money in this production from former first assistant director turned helmer, Adrian Grunberg. ~ Jeremy Wheeler, Rovi

The movie synopsis at IMDB reads:

Apprehended by the Mexican authorities, Driver is sent to a hardcore prison where he enters the strange and dangerous world of ‘El Pueblito’. Not an easy place for an outsider, unless it’s with the help of someone who knows the ropes – a 10-year-old kid.

Today, Tuesday, June 8, only ODDS can circulate. The measure is countrywide and applied between 5:00 am and 9:00 pm, save for those under the...
Redaqted