The government of Carlos Alvarado is trying to confirm the existence of a supposed network of people who provide clandestine shelter to Nicaraguan refugees in Costa Rican territory.

Security Minister Micheal Soto on Tuesday said the government is reacting to a report in the New York Times that suggests that possibility.

On January 12, the New York Times article “23,000 Nicaraguans Have Fled to Costa Rica. 50 Fugitives Are Hiding Here” alleges a secret safe house for Nicaraguan protesters who are trying to avoid capture by authorities in their home country.

Soto did not specify the location where this house would be.

The protests in Nicaragua began in April 2018, led by university students who showed discontent over a social security reform and then escalated to a civilian movement that demands the departure of Ortega and his wife and vice-president Rosario Murillo and a call for new elections.

Up to November, the Inter-American Commission on Human Rights (IACHR) report 325 death. 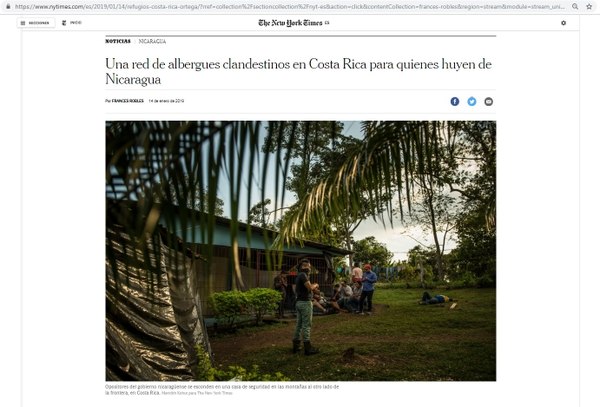 According to the article, the supposed refuge is financed by a Nicaraguan businessman, Jorge Estrada, who had fled to Costa Rica three years earlier after the government confiscated a housing development he was building.

“Estrada now runs something of an underground railroad. He has arranged for the hasty departure of about 600 people, he said and pays the rent for three safe houses including this one in Costa Rica. The fugitives call him ‘Comando’,” says the NYT article.

The Nicaraguan government’s version of this story, the protesters are terrorists and murderers.

Tuesday afternoon, during the press conference at Casa Presidencial, following the Governing Council (Cabinet) meeting, Soto stressed that the publication does not speak of the existence of a subversive group of Nicaraguans that is armed from Costa Rica, to take action against the Ortega government.

However, “this information must be reviewed in detail,” said Soto, suggesting the possibility of contacting the journalist responsible for the publication to verify it.

“The Costa Rican government does not favor or allow the use of Costa Rican territory for any type of activity that has to do with problems from neighboring countries,” Soto added.

According to the minister, it is common the existence of shelters in San José and in other provinces, where there are Nicaraguans seeking refuge that, with probability, may be against the Nicaraguan government.

“A different thing is that we are allowing or coordinating a kind of resistance established in the country for some kind of activities in Nicaragua,” he concluded.

According to the New York Times, the safe house is run by a 39-year-old mother of two who goes by the pseudonym “the Godmother,” whose real name is Lisseth Valdivia, and who used to own three clothing stores in Matagalpa, a city north of Nicaragua’s capital, Managua.

“She liked working out at the gym. She rode a new scooter. She was earning a decent living. Then her life, and the lives of tens of thousands of other Nicaraguans were upended in April (…),” Frances Robles writes.

The photos in the report appear men (mainly young people), women, adolescents, and children and speaks of at least 50 people living in the three-bedroom rural house. According to the article, the patio of the house is full of mattresses, suitcases and sheets are used to separate women and men.

“Although the property is on the other side of the border, in Costa Rica, those who live here take turns to do night watches because they fear that Nicaraguan agents may infiltrate their refuge,” the report says.

The article says she is in charge of vetting newcomers to the ranch, turning away anyone who has been in jail, because she fears they could have been released on the condition they become informers.

“If international help does not materialize, Nicaraguans are not interested in political asylum in Costa Rica,” says Valdivia. “Almost everyone is going back, even if it’s only with rocks.”

QCOSTARICA - A man who threatened to kill his...
Trends