COSTA RICA NEWS — The government suspended talks with dock workers on Tuesday following a number of violent outbreaks that included the burning of pictures of President Luis Guillermo Solís.

The next meeting to find a solution to end the weeklong strike is scheduled for this morning, Wednesday, at 9:00am.

Labour Minister, Victor Morales, called “reprehensible and condemnable” the actions of the protestors. 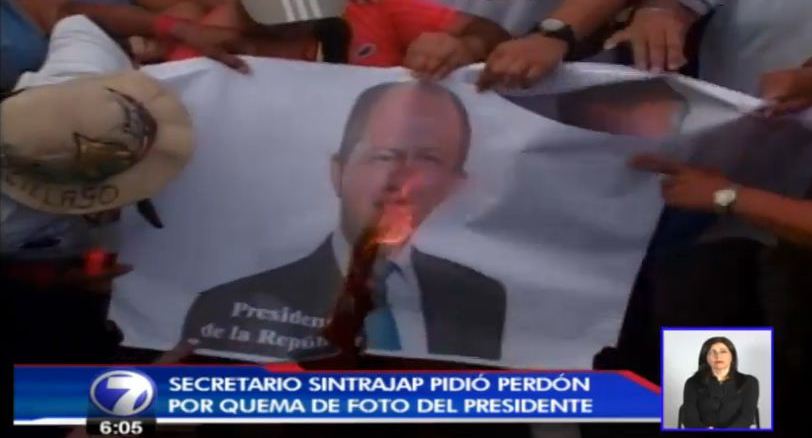 For his part, the head of the  Sindicato de Trabajadores de Japdeva (Sintrajap) union representing the dock workers, Ronaldo Blear, offered his apology to President Solís. But this did not convince the President.

In Canada, wooing foreign investors  at the Toronto Global Forum, President Solís said via video conferencing that he expects a written apology and hopes that “peace returns to Limón again.”

The dock workers strike began last Wednesday over the concession contract awarded to the Dutch company, APM Terminals to build a megaport in Limón, has gotten international media attention.

Paddy Crumlin of the Maritime Union of Australia, the ITF’s president and chair of its Dockers’ Section said: “This is another example of profit coming first, with governments putting effort – and violent effort – into attacking the public sector.”

Crumlin added, “Dockers’ unions worldwide will fight this. They’ll be reminded of the heavy-handed tactics used by the Australian government during the infamous Patrick’s Dispute fifteen years ago.”

Regionally, Latin American dockworkers’ unions have rallied and presented petitions to Costa Rican embassies. Now the ITF has stepped up the pressure, writing to port unions globally asking them for support.

“All the union members want is proper observance of the law, security for existing jobs and protection of their community. Instead, the government authorised disproportionate force and hired strikebreakers. Of course the international union community is shocked,” said ITF Regional Secretary Antonio Rodriguez Fritz. “We will fight this and we will win.”

Q REPORTS (DW) In Peru, the left-wing village school teacher Pedro Castillo has in all probability been elected the new president. The fact that...
HQ

QCOSTARICA - Fifteen months after the national emergency against covid-19 was declared, Costa Ricans will have a digital platform where you can be notified...
Trends