Limón: No End To Strike In Sight, Riots Continue 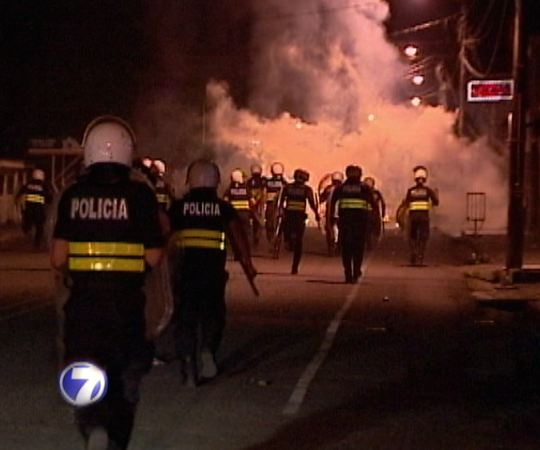 COSTA RICA NEWS — In the early hours of Tuesday, Cieneguita and Limoncito once again was filled with rioters while the strike by Limón dock workers continues.

In Cieneguita, police had to use tear gas to disperse the hooligans blocking public roads by setting fire to tires.

In Limoncito, the road connection to Ruta 32 was blocked off to all traffic.

In some cases police were met with stone throwing rioters.

The Vice-Ministro de Seguridad Publica (deputy minister of Security), Gustao Araya, explained that the police presence has increased in these two neighbourhoods.

These are confusing times. The port administrator, the Junta de Administración Portuaria y de Desarrollo Económico de la Vertiente Atlántica (Japdeva), assures that the posers are open and working. However, workers of the Sinjatrap union continue to their indefinite strike action.

Monday afternoon, the government reminded union leaders and workers of the plan by the Japdeva to invest at least ¢406 billion colones in port infrastructure.

Castillo explained that government plan is welcomed, but their opposition and reason for the strike, is against the APM Terminals concession contract to build a megaport at Moín.

The Dutch company was awarded the concession in 2010 by the Chinchilla administration (2010-2014) and ratified  by the courts earlier this month.