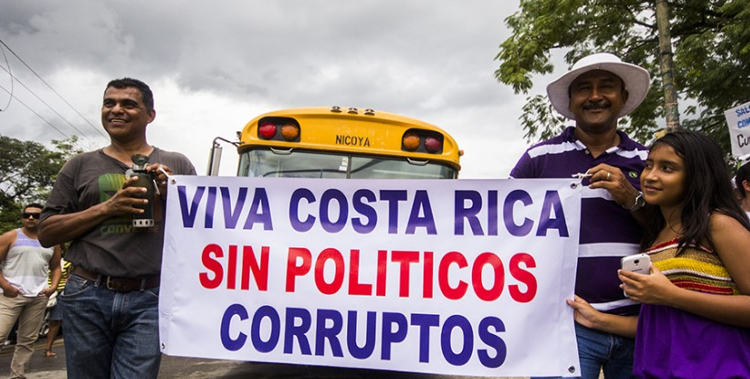 By: Wilberth Villalobos/VozDeGuanacaste – Today’s morning and part of the afternoon on this Tuesday June 25 was full of protestors around the country.

In Guanacaste, the largest mobilizations were at Liberia and Nicoya. However, there were protestors in Cañas, Filadelfia and Santa Cruz.

More than 500 people were at the entrance of the Nicoya, singing, displaying signs and proclaiming their disagreement with the government.

Likewise in Liberia, lines o up to 500 meters of protestors were reported. To the rhythm of traditional music and two soundcars, protestors stopped traffic from Liberia in the direction toward Bagaces.

The protest was made up of members of several organizations, including the National Asociation of Educators (ANDE), the Costa Rican Union of Education Workers (SEC), the Association of Secondary Education Profesors (APSE) and the hospitals of Liberia and Nicoya.

The rain also showed up in Nicoya, but protestors continued with the strike at the entrance to the Colonial City. Traffic is now backed up for several kilometers.

Wilmar Matarrita, coordinator of the march in Nicoya said he was pleased with the support received from Nicoyanos, who despite the rain remained in place.
Meanwhile, Julieta Castrillo a worker of Liberia’s Hospital Enrique Baltodano said that they had support of cleaning staff, nursing, pharmacy and medicine.   A largest protest is expected to equal or larger provincial level to the next July 25 at the provincial level.