A new report by the International Crisis Group (ICG) details how inadequate measures to combat drug trafficking helped exacerbate violence in the Guatemala-Honduras border region, a phenomenon that has important policy implications.

The provinces of Zacapa and Chiquimula on Guatemala’s eastern border had homicide rates more than twice the national rate of 34 per 100,000 in 2013. In the Honduran side of the border Copan and Ocotepeque had a combined rate of 102 per 100,000 in 2012, more than 20 points higher than the national average — though the number of killings dropped in 2013. 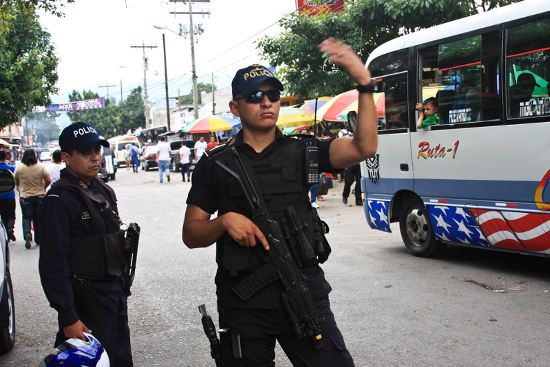 The June report, titled “Corridor of Violence: The Guatemala-Honduras Border” (pdf), notes that these provinces all share some important common characteristics: they are all poor, with high levels of unemployment, and little respect for or control by the government. They are also all important transit zones for contraband products and drugs, with hundreds of illegal border crossings known as “puntos ciegos” (blind spots) in the region. While the infamously bloody city of San Pedro Sula, in the Cortes province, also lies near this border, the authors note that the characteristics of the violence there are different, as it is an urban center with a heavy gang presence.

Although these regions have long been points of illegal passage of products and drugs, they have not always been so violent. According to the ICG, this is linked to “external shocks” over the last decade, including the unintended effects of authorities’ measures to combat drug trafficking and a reduction in the US market for cocaine, which has meant trafficking groups are now competing for a share in a smaller pot of profits.

One factor has been Mexico’s anti-drug strategy since 2006, which, as noted in previous reports, has greatly increased the trafficking of US-bound drugs through Central America. The weak and corrupt “Northern Triangle” countries — Honduras, Guatemala and El Salvador — have been particularly affected by this.

Meanwhile, since 2009, interdiction by Guatemalan authorities has helped push drug flights out of the northern Peten province and into neighboring Honduras, from where the shipments enter Guatemala by land, greatly contributing to the flow of drugs in the border region.

In recent years Guatemalan authorities have also captured the heads of some of the country’s oldest drug clans — including Waldemar Lorenzana, who had long operated in eastern Guatemala as the de facto authority in the region, maintaining a broad network of alliances and building local support. His arrest gave Mexico’s extremely violent and aggressively expansionist Zetas, who first entered Guatemala in 2007, as well as other local challengers, more space to operate in the strategic border region.

The ICG report comes just months after the government of President Otto Perez Molina announced the creation of a new task force to combat rising violence and criminal activity in northern and northeastern Guatemala. The new unit is modeled on of a task force that began operating along the Mexican border in 2013.

However, the ICG notes that border patrols will not be enough to combat insecurity in a region that also suffers from serious social, economic and institutional weaknesses. The organization calls for a more comprehensive strategy to address drug-related violence, including strengthening local police and judicial bodies, providing educational opportunities, and encouraging public and private investment in these regions.

As of January 2013, some 79 percent of murders in Guatemala were concentrated in 10 provinces in the country’s southeast. While authorities debate how many of the country’s murders can be attributed to the drug trade, it seems clear that changes in both the regional and local drug trafficking landscape have greatly influenced violence near the Honduran border.

In June 2009, a military coup in Honduras toppled the government of then-President Manuel Zelaya. Drug traffickers quickly took advantage of the ensuing chaos and political confrontations and turned the country into a criminal stronghold. It was around this same time that drug flights shifted into Honduras. Plaza Publica has noted how the resulting proliferation of land routes to bring shipments into Guatemala provided more opportunities for the theft of drug loads, and thus for potential conflict.

Both the eastern provinces of Izabal and Zacapa were invaded by the Zetas fairly early on in their campaign, which greatly changed the criminal dynamic in the region. According to Plaza Publica, an increase in violence in the provinces bordering Honduras may have corresponded with the time when the Zetas began charging a percentage on shipments coming through their territory in 2011, killing those who got in their way.

The ICG report shows how official policies helped contribute to this situation, both by pushing criminal activity to migrate in the case of the drug flights and to change in nature by decapitating long-established and socially rooted criminal groups.

The Guatemala-Honduras border region is perhaps one case-in-point regarding national authorities’ failure to take into account the potential secondary effects of their security policies.

There are numerous Latin American examples of how targeting criminal activity in one country leads this activity to migrate or diffuse. This appears to be occurring now with the South American flights to Honduras, which have begun landing first in Panama and Nicaragua, in response to interdiction measures. It is also common for the decapitation of drug gangs to lead to criminal turmoil as old groups fragment and new, smaller ones emerge.

The report also highlights how the deployment of a task force to resolve violence that has resulted partly from such security policies is short-sighted and fails to consider factors specific to the border region’s violence.

The Guatemala-Honduras border shares characteristics with many of Latin America’s other border regions. These are often geographically remote, poorly monitored, weakly governed and under-resourced, making it difficult to combat criminal activity. This facilitates the flow of drugs and other contraband, making them strategic regions of operation for criminal groups and thus often centers of violence — as has long been the case with the Ecuador-Colombia border and as is becoming the case in the growing drug hub on the Paraguayan border with Brazil.

Militarized security policies — such as task forces — have often been accused of acting as temporary solutions that fail to address these kinds of root problems, despite their popularity in places like Honduras and Mexico. As the ICG points out, it is precisely the underlying causes of violence that ultimately need to be addressed, and improving the capacity and reliability of local security forces rather than relying on a national special operation should be a key element of this.

TODAY COSTA RICA - Original text published in La Nacion on June 23, 1971 - A conflict over air routes, has been unleashed between...
Front Page