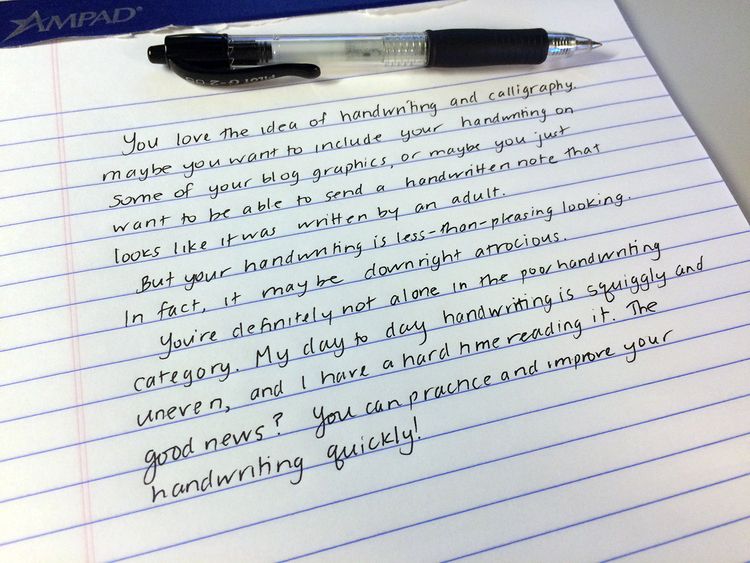 Last week, the Finnish government made a bold decision. It decided that Finnish schools will phase out handwriting instruction by 2016. “We’re only giving up writing where all the letters in words are joined together and moving to letters closer to print: they’re easier to write,” Katja Anttila of the FinnFacts news agency explains.

At the same time, Finns will pay more attention to computer typing lessons. Instead of spending hours trying to get the letters perfectly connected, students will learn to type using tablets.

“The education system has to keep up with technological progress,” Finnish Education Minister Minna Harmanen explains in an interview with Finland’s Savon Sanomat newspaper.

Is this decision right? When you think that we now use the keyboard much more often than we use a notebook and pen, it seems so. However, neurobiologists caution the Finnish authorities not to go too far. Writing by hand has a powerful effect on the brain, and abandoning it will not benefit children.

Not only does writing with a pen help develop fingers, but also thinking, according to Prof. Virginia Berninger of the University of Washington, who used functional magnetic resonance imaging to find that writing by hand activates the parts of the cerebral cortex responsible for memory and learning new information. This can be seen in the children’s work.

The researcher asked elementary school students of the second, fourth and sixth grades to write short essays by hand or on the computer and then analyzed the resulting texts. It turned out that works, essays, for example, written by hand, were more imaginative and lexically diverse. A student becomes an experienced essay creator capable of expounding on a topic in a reasoned, coherent, and complete manner, which also affects thinking positively.  That’s because the brain works harder to write, Prof. Berninger says.

And the handwriting is a great memory developer. It helps to memorize the content of lectures, and the preparation of cribs is an excellent method of preparing for the test, as every pupil and student knows. The information that we record with the keyboard is faster from memory than the information we wrote down. This was shown in an experiment conducted on American students by two psychologists, Pam Mueller of Princeton University and Daniel Oppenheimer of the University of California. They asked participants to listen to a lecture and record its content as they felt comfortable (about 50% of American students take notes on a computer). Then the recordings were analyzed and checked what was retained in the students’ memory.

It turned out that computer notes were more detailed than handwritten notes. Curiously, students who had written with a pen were able to reconstruct the main idea of the lecture and the conclusions that followed from it more easily. Students with notebooks remembered less despite their detailed notes. “The two groups showed different results: those who wrote by hand recorded the most important theses, they had to comprehend what they heard and analyze the information as they received it. Thanks to this, it is more deeply imprinted in their memory, “- scientists write on the pages of the journal Psychological Science. In turn, the owners of the laptops more often wrote down the lecture word for word. But such mindless copying does not develop memory but instead leads to pain in the wrists.

In children who are just beginning to learn, handwriting primarily stimulates the development of the parts of the brain responsible for recognizing letters and connecting them into words. Anne Mangen proved this at the Universities of Stavanger and Marseille. Using functional magnetic resonance imaging, they observed how the brain works when a person writes notes on paper or prints them using a computer. In people who used a pen, the areas of the brain associated with sensorimotor functions, that is, the interpretation of tactile sensations worked much more intensively. At the same time, the so-called Broca center, which is responsible for the formation of speech and the connection of letters into words, i.e., the ability to read and write, was noticeably activated. The Broca center was much less activated in people who typed on a keyboard. Scientists believe this means that writing by hand is much more likely to create the network of those neural connections that result in learning letters and being able to read fluently.

Another experiment conducted on adults shows how vital the role of sensorimotor skills is in activating the parts of the brain responsible for learning to read and write. Its participants were asked to learn an artificial alphabet consisting of 20 letters that do not exist in reality in six weeks. Some participants learned to write letters by hand, while others learned to write them on a computer. Then scientists checked the results of their work. It turned out that those who wrote with a pen remembered the alphabet better than those who retyped it on a computer.

A functional magnetic resonance imaging study of their brains showed that those who wrote with a pen had Broca’s center activated. In contrast, those who used a computer had no activity in this significant area of the brain. This means that the more we stimulate the parts of the brain associated with tactile sensation, the easier it will be for us to learn to read and write. “Sensorimotor exercises are now used primarily to teach writing to dysgraphic and special school children, but our research demonstrates that such training should become an integral part of the learning process for all children and adults,” says Anne Mangen.

Switching to the keyboard

All of this does not mean that children should not be taught to type on a keyboard. Quite the contrary! They should, because, as Anne Trubek of Oberlin College has observed, children who learn to type on their type quickly, but with two fingers (what Americans call “hunt-and-peck”): They have to keep looking at the keyboard to find the right letter.

Much better to type without constantly looking at the keyboard and using the well-known method of ten-finger typing, called “blind. It has a special way of positioning your hands on the keyboard and using the convex elements on the F and J keys for orientation. “When we type freely, we can focus not on finding the letters but on the thoughts we are writing down. Such typing is an example of acquired automatism, the brain’s ability to follow some action without thinking about it,” the researcher explains in New Scientist.

It can be compared to walking: to move forward without falling, and we don’t think about how to take the next step. It’s the same with blind printing. At the same time, this method most of all resembles writing by hand because it engages the areas of the brain responsible for tactile sensations. This is why it should be taught at school.

The Finns seem to be well aware of all this and do not intend to do away with handwriting. They believe that students learn to write in print faster, and they have more time to learn how to type correctly. Schools will introduce more creative lessons to keep kids improving their handwriting skills: drawing and paper-cutting. If a teacher decides it’s worth teaching children calligraphy, he can do it, and the Finnish schools don’t ban it.

The most important thing is not to mix two kinds of handwriting: block letters and cursive, because if you do, the results will not be good, according to Isabelle Montésinos-Gelet, a professor at the University of Montreal. The researcher has spent years observing Canadian children, who have been taught differently than European children for generations. They learn block letters in first grade, and only in second grade do they learn capital letters. Often, they become confused about this, and second graders start writing in block letters at home. When learning two types of writing, the brain slowly builds up an automatism of movement that allows them not to think about the process of what is being done. Learning just one type of writing will enable you to overcome that invisible barrier beyond which learning to write becomes natural much faster.

So the recipe is simple: handwriting should not be neglected when teaching children to use the keyboard. Not only because it is necessary for the developing brain, but also because it is one of the few things that make each person unique, one of a kind. No two people in the world have identical handwriting. It was proven by Sargur Srihari of the State University of New York at Buffalo, who used a computer to analyze the writing of 1,500 people. After studying 11 parameters that included the size and slant of letters, he concluded that it is impossible to find even a single letter written the same way by two different people. It does not matter if someone has studied calligraphy or is unfamiliar with the art: everyone develops their handwriting.

Taking up blogging in college is an engaging and profitable activity...
Read more

QCOSTARICA - The Movimiento Civico announced protests for this...
National