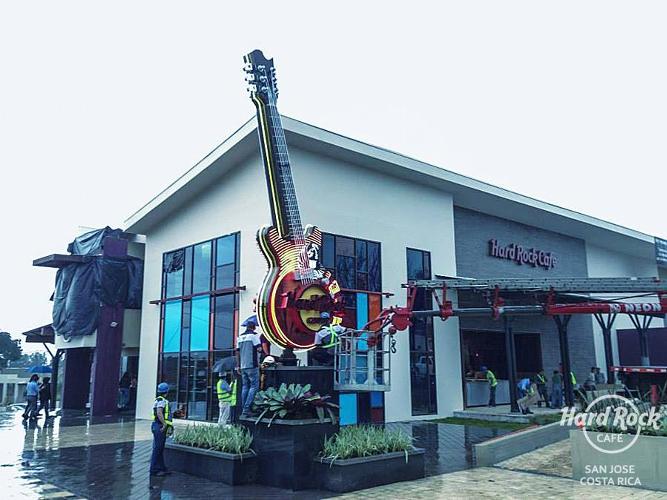 After months of delays, the Hard Rock, located in front of the Hotel Herradura, will open its doors to the public. The Herradura is now known as the Wyndham San José Herradura, previously known as the Ramada Plaza Herradura, but to Costa Ricans and foreigners living here for more than a decade, it will always be just the “Herradura”.

And, oh yeah, for those who don’t know the Herradura, it is across from Plaza Real Cariari.

The Hard Rock, with a US$3.2 million investment will have a seating capacity of 310, a concert area for 700-800 (standing) music fans and an outdoor patio.

In 2007, the Hard Rock chain was bought out by the Seminole Indian tribe in Florida and now has 175 restaurants, hotels and casinos in 55 countries, including Medellin, Colombia and now San José, Costa Rica.

Gustavo Araya, a partner in the Costa Rican franchise, said not to expect Hard Rock outlets to sprout in every district of San Jose. “There aren’t two Hard Rock Cafe (restaurants) in Paris, France, in Madrid or Barcelona in Spain. There is just one per city and this is what makes it unique,” he said.

On the Hard Rock website, the Costa Rica location is described as  it will be the heart of entertainment in Costa Rica  most important hotel district of San José, where within 10 minutes drive of the future Cafe, there are more than 1800 hotel-rooms, 3 commercial plazas, and a number of restaurants and bars.

The popularity of the Hard Rock brand in Costa Rica is seen on Facebook where more than 30.000 “hardrockers” are following the brand.