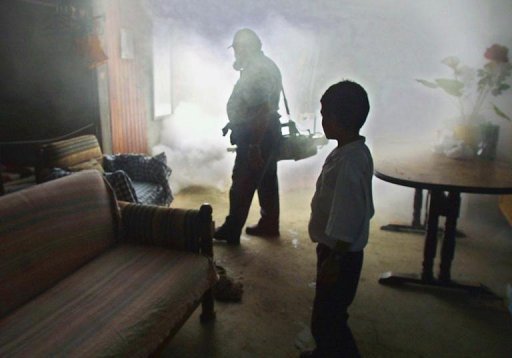 Costa Rica’s Health Ministry on Tuesday declared a health alert due to a dengue or breakbone fever outbreak which has claimed three lives and infected about 12,000 people so far this year. 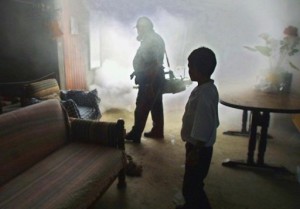 Health Minister Daisy Corrales said the infection rate was four times worse than that of 2012. Corrales also confirmed that the three deaths were from the life-threatening dengue hemorrhagic fever.

“We have to warn the population so that they do not end up in emergency situations,” she stressed.

Corrales warned that authorities were concerned that three dengue strains were in circulation heading into the rainy season, a prime time for mosquitoes that transmit the disease.

The worst outbreaks of the disease have been in towns on the Pacific coast, popular with sun-and-sand vacationers.

In Parrita for example, there have been 525 infections in the past five weeks.

Dengue is transmitted by several species of mosquito within the genus Aedes, principally A. aegypti. The virus has four different types; infection with one type usually gives lifelong immunity to that type, but only short-term immunity to the others. Subsequent infection with a different type increases the risk of severe complications. As there is no commercially available vaccine, prevention is sought by reducing the habitat and the number of mosquitoes and limiting exposure to bites.

Treatment of acute dengue is supportive, using either oral or intravenous rehydration for mild or moderate disease, and intravenous fluids and blood transfusion for more severe cases. The incidence of dengue fever has increased dramatically since the 1960s, with around 50–100 million people infected yearly. Early descriptions of the condition date from 1779, and its viral cause and the transmission were elucidated in the early 20th century. Dengue has become a global problem since the Second World War and is endemic in more than 110 countries. Apart from eliminating the mosquitoes, work is ongoing on a vaccine, as well as medication targeted directly at the virus.

Typically, people infected with dengue virus are asymptomatic (80%) or only have mild symptoms such as an uncomplicated fever. Others have more severe illness (5%), and in a small proportion it is life-threatening. The incubation period (time between exposure and onset of symptoms) ranges from 3–14 days, but most often it is 4–7 days. Therefore, travelers returning from endemic areas are unlikely to have dengue if fever or other symptoms start more than 14 days after arriving home. Children often experience symptoms similar to those of the common cold and gastroenteritis (vomiting and diarrhea) and have a greater risk of severe complications,though initial symptoms are generally mild but include high fever.

There are no approved vaccines for the dengue virus. Prevention thus depends on control of and protection from the bites of the mosquito that transmits it. The World Health Organization recommends an Integrated Vector Control program consisting of five elements: (1) Advocacy, social mobilization and legislation to ensure that public health bodies and communities are strengthened, (2) collaboration between the health and other sectors (public and private), (3) an integrated approach to disease control to maximize use of resources, (4) evidence-based decision making to ensure any interventions are targeted appropriately and (5) capacity-building to ensure an adequate response to the local situation.