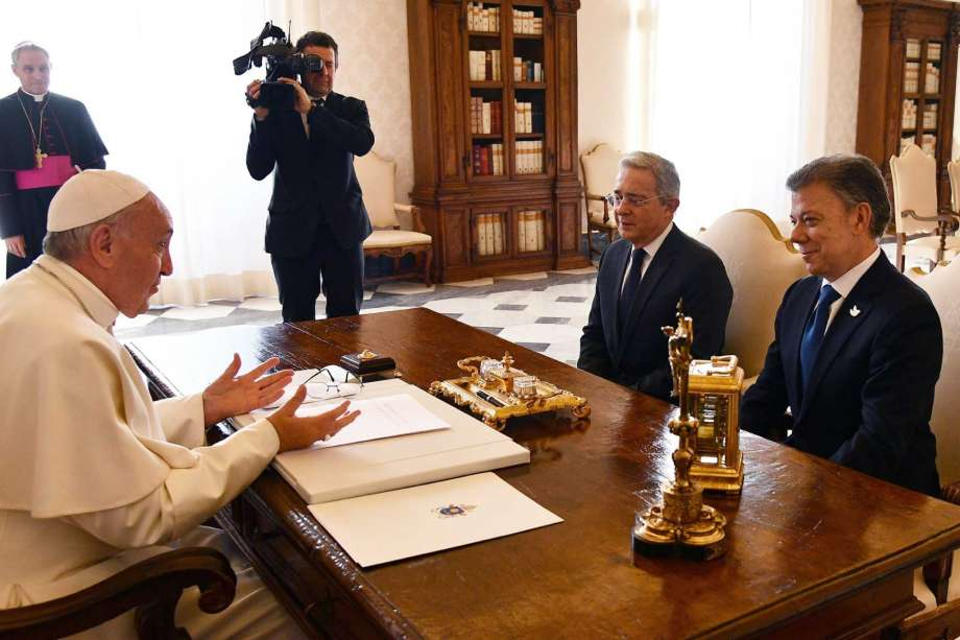 TODAY COLOMBIA NEWS  – President Juan Manuel Santos and former president and current senator, Alvaro Uribe, met with Pope Francis at the Vatican on Friday, in a bid to build consensus on the peace deal with the FARC.

Uribe has been the deal’s harshest critic, arguing penalties for human rights violations by the Revolutionary Armed Forces of Colombia (FARC) rebels are not stiff enough.

“The Vatican proposed this meeting to President Santos and he accepted,” Interior Minister Juan Fernando Cristo told journalists. “We hope it will bring positive results.”

Santos signed a modified peace deal in November, after the first version was rejected in a plebiscite. Though Santos and Uribe met after the vote, the new accord does not include opposition demands that FARC leaders serve traditional jail sentences and be banned from forming a political party.

Some 7,000 rebel fighters are now making their way to special demobilization areas to hand over their weapons.

Santos and hardliner Uribe were once allies – Santos served in his predecessor’s cabinet and Uribe backed Santos’ first presidential bid. But the two turned against each other over the peace deal, the centrepiece policy of the Santos administration.

Pope Francis repeatedly expressed his support for the deal over four years of negotiations.

Congress recently approved the deal and the constitutional court has ruled that laws relating to implementation can be sped through approval processes, key to safeguarding a ceasefire and reassuring nervous rebel commanders.

The conflict in Colombia, which includes a smaller guerrilla movement as well as paramilitary groups and narcotrafficking gangs, has killed more than 220,000 people and displaced millions.