Costa Rican paraplegic athlete Laurens Molina was training Thursday for two events remaining this year as he has for the past 20 years just north of La Sabana Park when a car hit him in his special bicycle wheeled aluminum cart which he “runs” races for physically handicapped persons. 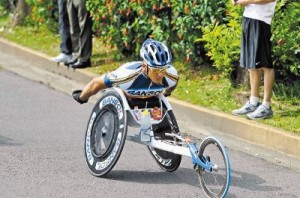 The crash fractured both wrists and effectively knocked him out of the Chicago event Oct. 13. But Molina says he hopes to compete in the New York Marathon at the end of the year after a Friday surgery by Olympic athletic orthopaedic surgeon Dr. Erick Solano.

He was rushed to nearby San Juan de Dios Hospital immediately after the accident when X-rays were taken of his wrists. Surgery was performed in the private Clinica Catolica hospital Friday. “The break I have is complicated,” Molina explained toLa Nacion, “but with the insertion of some screws recuperation will be more rapid.”

Dr. Solano said Molina could recover by encasing his wrists in casts but recuperation will be faster and less painful with surgery. “His hands are also his feet,” explained the surgeon, underscoring the advantage of speed. His racing cart uses his arms and hands on wheelchair main wheels for power.

Molina was training on the highway when a car hit him on the right side while it was backing out of a parking lot. At the hospital his wrists were encased in temporary casts to keep the bones stable. As an athlete, Molina’s physical condition is superb so his recuperation is expected to be rapid.

Today, Monday, June 21, we are back to the two plates that cannot circulate, in today's case plates ending in 1 & 2 CANNOT...
Weather