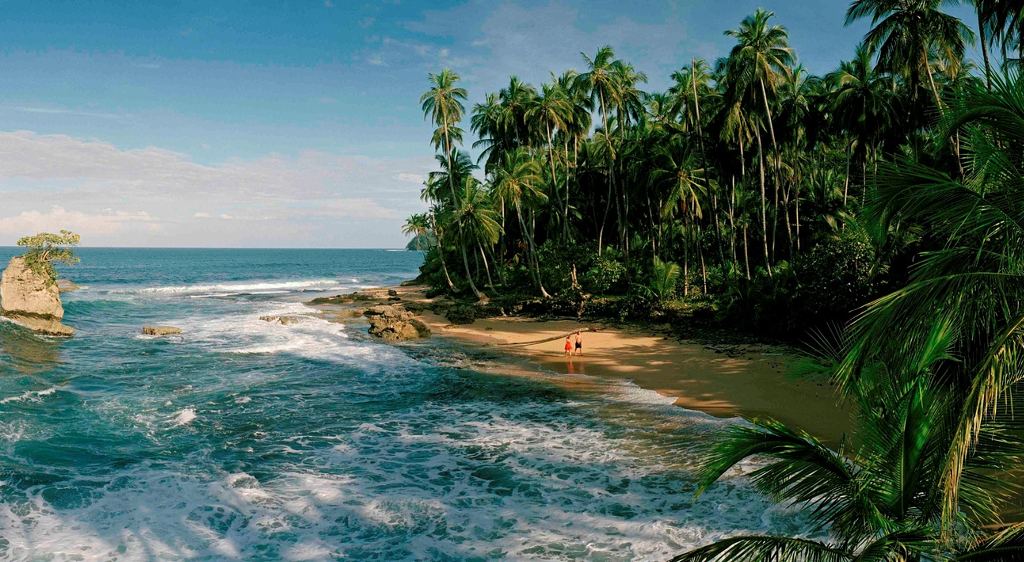 QCOSTARICA TRAVEL – The essential itinerary for Costa Rica was defined long ago: Manuel Antonio for the beach, Monteverde for cloud forest, Tortuguero for turtles, and Arenal volcano for outdoor adventure. Add in the area of sandy beachfront in Guanacaste that has also been set aside for large hotels and you have all the elements of most package tours to the country.

But the true beauty of Costa Rica lies in its smaller, emptier spaces. And though there is plenty of adventure on offer (when they say you can zipline from one end of the country to the other, they’re only half joking), it’s the V-formation of pelicans flying over your hammock, lightning over a silver sea, pink orchids against turquoise houses, a passing cowboy with silver stirrups, the white sand and deep blue sea that stay in the memory – along with the state of the roads. 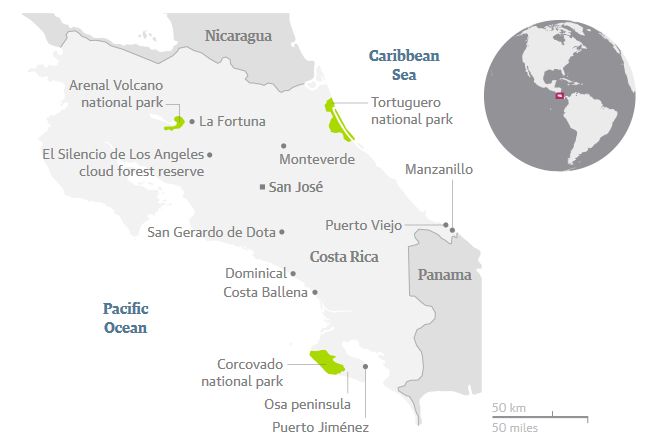 Costa Rica has a mountainous spine, so crossing from Pacific to Caribbean coast takes forever. Resign yourself to loops in all directions out of the capital San José, which sits in the Central Valley, and remember that internal flights will save time and stress. What looks like a quick journey on a map will not be: the 105 kilometre (65-mile) drive from Arenal to Monteverde, say, can take six hours.

You’d be forgiven for thinking that the old capital has been left to rot while a replacement, made of condos and strip malls, is built around it. The gridlocked downtown blocks aren’t pretty, with their cracked pavements, stinking drains, seedy bars, pickpockets, rusting tin roofs and ocarina sellers.

But old San José has its sights, from Museo de Jade (Plaza de la Democracía) and Museo del Oro (beneath Plaza de la Cultura), both with unrivalled but unsung pre-Colombian treasures, to the warren of the Mercado Central, and the pay-to-view grandeur of the Teatro Nacional.

Start at the city’s western edge with a visit to Museo de Arte Costarricense in the old air traffic control building of what used to be the airport, then head down Paseo Colon.

A quarter of Costa Rica is protected parks and reserve, but the crown jewel is Corcovado national park, 164 square miles of rainforest in the Osa peninsula, fringed by empty Pacific beach. Remote and largely impenetrable, it’s home to five species of cat (jaguar, puma, ocelot, margay and jaguarundi) plus tapir, sloth, monkeys, boas (there are lots of snakes: wear boots) and almost 400 bird species. Here’s your best chance of spotting Costa Rican wildlife – and the waters are rich with dolphins and, seasonally, pods of whales.
Advertisement

Access is with guides only, and reservations need to be made well in advance. Hikes range from easy day trips, mainly around San Pedrillo, to multi-day treks with overnights at Sirena, a magical, ultra-basic ranger station. (It’s also accessible by boat and small plane.) Most lodges on the peninsula include Corcovado hikes as part of a package; for something more full-on, contact Osa Aventura (+506 2735 5670). It has a one-day hike for $85pp, including park fees, guide, lunch and transport, and a three-day adventure tour for $395pp including two nights at Sirena. For a list of approved guides email the park office in Puerto Jiménez.

Up in the mountains, you find children in sou’westers herding friesians, then cloud forests where everything’s dripping, and doused in golden light. Reminiscent of Somerset in October it may be, but squelching down misty trails to the plink of tree frogs and the warbles of bellbirds is an unearthly experience. Also lurking among the foliage are 420 species of orchid, and scarlet poison dart frogs in purple stockings. Wherever you visit, expect rainbows, the strong aroma of a cedar cabin, and a damp, chilly night.

Monteverde is the classic cloud forest choice, and the most child-friendly, with sky tram, sky walk and, for over-eights, canopy zip lines. If you are travelling south, San Gerardo de Dota, 46 miles from the capital and 2,200 metres above sea level, makes a top stopover.

Costa Rica has two coasts and more than 300 beaches, some the domain of turtles. But there are two areas that have everything, from surfer bars to top-end retreats, party beaches to silent jungle. The first is the jungly Costa Ballena on the Central Pacific, extending 18 miles down Highway 34 from the grey-sand surfer town of Dominical to mini gastroville Ojochal.

This coast, settled by West Indian fishermen in the 19th century, is English-speaking, and that vibe still dominates, despite a steady influx of more excitable jungle lovers. The obvious thing to do is read in a hammock, perhaps rent a cheap bike and visit a beach cafe. But boat trips, snorkelling, and mountain hikes can be arranged through the Asociación Talamanquena de Ecoturismo y Conservación office. Surf camps run courses for beginners (the mighty Salsa Brava break tosses even experts off their boards), and a visit to either the Jaguar Rescue Centre at Punta Cocles though jaguars aren’t always on view, or the Sloth Sanctuary, a short drive north in Cahuita, is almost obligatory.

Volcán Poás is easier to visit (it’s virtually a drive-in) and Volcán Rincón de la Vieja is wilder, but Arenal is unmissable. Only one thing beats the thrill of seeing Arenal erupt, and that’s seeing it erupt while you’re sitting in a hot spring. The hot spring industry sprang up as a way of entertaining frustrated visitors who arrived to find the perfect cone shrouded in cloud.

- Advertisement -
Paying the bills
Previous articleQToons: Our Politicians on Black Friday
Next articleHundreds Gather in Cuba In Frustration at Ecuador Visa Rule

QCOSTARICA - As a result of the modification to article 148...
Read more

QCOSTARICA - In 2020, Costa Rica was the largest...
Infrastructure