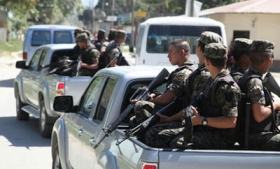 Honduras has signed into law the creation of a military police force to help confront the country’s security crisis, a move that has provoked human rights concerns and skirts around the need to overhaul existing police bodies.

The Military Police of Public Order (PMOP) will begin operating in October with 900 members, reported La Prensa. The government has initially budgeted about $1.2 million for the force, which will be composed of current soldiers.  It will be coordinated by Security Minister Arturo Corrales, according to Daniel Flores, head of the Congressional commission that approved the law.

The responsibilities of the force range from recovering city spaces that have been taken over by street gangs to combating organized crime and making arrests, reported Proceso.

Members of the country’s Public Security Reform Commission (CRSP) criticized the law, saying they were “not in agreement with this militaristic project,” reported El Heraldo, a sentiment that was echoed by human rights organizations.

This is not the Honduran government’s only new project aimed at fighting crime. With the help of the United States, the country has created a manual to assist with asset forfeiture cases, something that has been instrumental for countries such as Colombia in bringing down the money laundering and support structures of criminal organizations, as well as confiscating the illegal earnings of the drug lords.

Creating a military police force forms part of a series of measures aimed at improving security in the world’s most dangerous country  The national police are notoriously corrupt and a large percentage are thought to have organized crime ties, but this latest change fails to address the need to reform the existing police.

An ongoing police reform process has seen little in the way of results, with police who have failed lie detector tests remaining on the force. In the face of stalled reform efforts, the country had approved the creation of a new special military police unit, the “Tigers,” and also placed the military on city streets to conduct joint patrols with police, as well as recently approving the creation of a new community police force.

While the creation of a militarized police force may be a better alternative than placing the military directly on the streets, the line between the two is hazy and the force ultimately cannot replace the need for an effective national police force. The decision also raises human rights concerns regarding the potential use of military tactics to improve citizen security.