Every name of every country has a story behind it, but if you look closely, those stories begin to resemble each other.

Most country names fall into one of four categories:

There are plenty of examples from each category, some older than others, and some imposed by outsiders.

Under the category of countries named after a feature of the land, you’ll find Costa Rica.

It’s not clear which explorer named Costa Rica (“the rich coast”), but one account suggests it was Christopher Columbus, who saw indigenous people wearing gold and didn’t realize it was imported.

The Spanish gave Honduras its name, meaning “depth” or “deep water,” and they also named Barbados, or “bearded ones,” allegedly after the great banyan tree found there, ficus citrifolia, because of their long aerial roots. 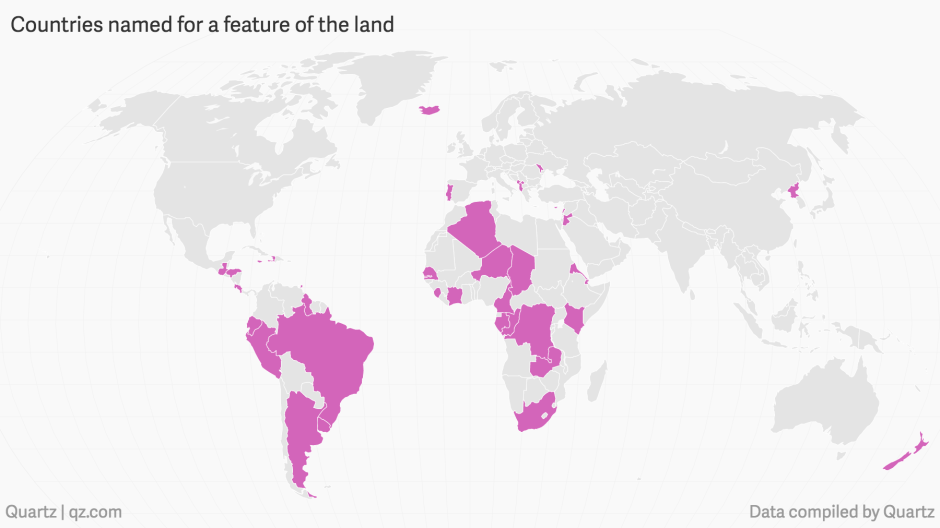 In the category of “an important person, most likely a man”, Columbus appears to have left his mark on the most countries of any one person, eight countries total. See: All the countries named for or by Christopher Columbus

Colombia is named after Christopher Columbus, though not by him.

The United States of America is named for the Italian explorer Amerigo Vespucci, the person credited with realizing that the continent the Europeans bumped into in the late 1400s was not India.

In 1507 German cartographer Martin Waldseemüller suggested these lands—at the time, referring just to South America—be named “from the discoverer Amerigo…as if it were the American land, or America.

Venezuela was named by a Spanish expedition—which included Vespucci—that saw houses built over water and thought it looked like Venice.

Canada likely comes from the Huron-Iroquois word “kanata,” which means “village” or “settlement,” confused by 16th-century French explorer Jacques Cartier to be the name of a place.

Quartz research reveals that the way countries get their names is hardly ever democratic, and very few are rooted in the national qualities we like to associate with them, like liberty, strength or justice.

Just like our first names are handed to us without our input, the names of nations are inherited, arbitrary, and, often, absurd. Quartz says that there are 20 or so mysterious countries whose name origins are disputed or unknown.

Quartz says it relied on the gold standard toponymy reference book, the Oxford Concise Dictionary of World Place-Names, by John Everett-Heath. and manually compiled information on all 195 independent states recognized by the US, to create a taxonomy of the world’s political order.

Name origins are often murky, so this is an inexact exercise. Sometimes the most fun or attractive origin stories are bunk.

There are plenty more stories of country names for each category, and a special category for those that don’t fit into them, at Quartz.

QCOSTARICA - The opening of the new section of...
Pura Vida