How Talking to Someone on a Plane Can Change Your Life

We’ve all been there. Although you might not always be in the mood to chat with a stranger, making friends when traveling can be incredibly rewarding.

Talking to people on planes is a hotly debated topic. Some stick with their plan to stay silent: wine, window seat, eye mask. Others open themselves up to conversation, and even end up meeting their soulmates. Bottom line? Most people have a story about meeting someone on a plane—good or bad. 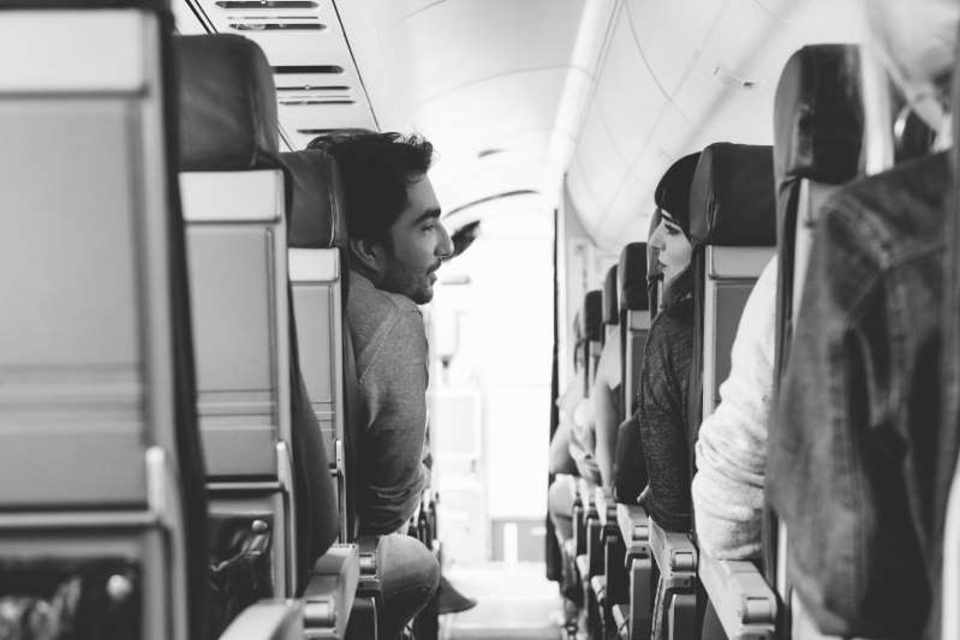 In his research, Epley found that we often mistakenly assume we’ll be happier sitting in silence than talking with others, and we underestimate how interested others are in talking to us. In one study, Chicago commuters had a better trip when they connected with a stranger than when they didn’t, despite predicting the exact opposite outcome.

It’s this paradox—plugging in headphones, ignoring strangers sitting mere inches from us—that has steered Epley’s work. “The capacity of the [human] mind to connect with others is the thing that makes us uniquely smart on this planet, and it also seems critical for happiness and well-being,” he says. “Yet, I would look around and see highly social people totally ignoring others. It’s the kind of thing that strikes a psychologist as odd.”

We laughed, shared Starburst, and, after a fast two-plus hours, landed. I have no idea where Chris Walker is today, but thinking about him makes me smile. A seemingly inconsequential conversation can ease a transition, too, as it did for 26-year-old Kylie Gilbert, who, on a flight from New York City to Paris in 2012 for a college study abroad program, exchanged phone numbers with her French seatmate, and wound up with a new friend. “It was a great way to get out of our American bubble, hang with local students our age, and practice French,” she says. Eight years later, the two, both living in New York, are still friends.

Sometimes, those meetings on planes have bigger implications. In 2007, while flying between Aspen and Chicago with his father, 28-year-old Andy Drane met a man who would go on to help heal his brother’s debilitating anxiety.

“My dad forced me to take the middle seat, and the guy next to me saw me reading a book and started talking to me,” says Drane. “He asked a ton of questions.” The man was not just a nosy neighbor—he was a Chicago-based psychiatrist who specialized in anxiety and panic. Though the doctor initially said he wasn’t taking new patients, by touchdown, he had agreed to take on Andy’s brother, Nick, who suffered from severe, daily panic attacks during high school and had seen little relief from treatment.

Nick ended up seeing the doctor for years. “He taught me how to effectively deal with anxiety, such that I don’t get anxiety anymore,” he says. “I don’t pay anxiety much attention at all today.” The doctor has since passed away, but for Nick, the plane conversation was a life-altering encounter: “I found the treatment profoundly effective and, without a doubt, it completely changed my life.”

Then, of course, there are the love stories. Lindsay McHugh, a 32 year old based in Brooklyn, met her husband on a flight between Sydney and Los Angeles after wandering the aisles and striking up a conversation with a group of Australians, one of whom she hit it off with. “We exchanged contact details on a napkin,” she says. “I got a call the next day.” The two are now married, expecting their first child.

These are the good examples—and of course, not all plane encounters are good. Being too much of a Chatty Cathy can be an annoyance, and people speak of rude, or worse—abusive—encounters with fellow passengers, too. Even more? There’s nothing wrong with enjoying a little peace and quiet and not talking to anyone on a flight.

To this, Epley clarifies his research: It doesn’t suggest conversations are always pleasant, or that you should talk to everyone—but in general, conversations tend to be better than we think they will be. “The mistake that we make is in psychological barriers that keep us from engaging with someone we’d otherwise want to talk to,” he says.

That’s why his advice is to follow your urges to say hello, give a genuine compliment, comment on someone’s book. Conversation pulls for commonalities, Epley says, which is why we quickly unearth stories of shared anxiety, connect with strangers over place, and find friendship.

When my husband was a kid, he and his brother took a trip to Jamaica with their father, a former professional tennis player who had picked up a coaching gig at a Caribbean resort. On the flight, they met another family with two young boys heading to the same resort.

After the initial meeting and a week playing tennis in the sun, the families had become fast friends. Years later, the friendship remains: That same family was at our wedding last September.

QCOSTARICA - After three days of nothing, not a word from the Ministry of Health, on the current covid-19 situation, Monday afternoon numbers were...
Nicaragua

TODAY NICARAGUA – The Observatorio Ciudadano (Citizen Observatory) report revealed this Friday, May 7, 878 new suspected cases of infection with the virus and...
Nicaragua

TODAY NICARAGUA (Confidencial) Six months before the general elections in Nicaragua, The Economist Intelligence Unit (EIU) predicts that the regime of Daniel Ortega and Rosario...
Health

QCOSTARICA - The hook of six states promoting Covid-19 inoculation for tourists in the United States caught many Costa Ricans. They are Texas, Alabama, Arizona,...
Mexico

Q24N - Mexico City will reduce social distancing measures as of next week in the face of a continuous decline in the spread of...
News

QCOSTARICA - It took 200 years, but it was achieved, two women to preside over Congress in the same legislative period (2018-2022). On Saturday, May...
Economic Policy

QCOSTARICA - The Covid-19 infection rate in Costa Rica dropped, but not enough to reduce the rate of infection. While the indicator stands at 1.32,...
World

Q REPORTS (The Economist) Technological change is upending finance. Bitcoin has gone from being an obsession of anarchists to a $1trn asset class that...