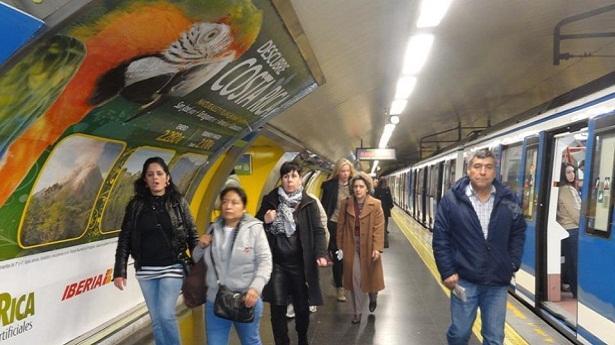 Image of Macaw in Madrid subway billboard IS NOT Costa Rican!

For 2013 the  Instituto Costarricense de Turismo (ICT) has targeted Madrid to promote Costa Rica as a tourist destination to the Spanish community. Using the “Lapa” (Macaw) is part of the display advertising to achieve the goal.

According to Ireth Rodríguez, marketing director at the ICT, the advertising campaign is a cooperative effort with the Spanish company, Corte Inglés, where each will contribute 50% to the cost.

However, there is an error that has not went unnoticed.

The images on display in the Madrid subway shows a bird with green, orange, black, blue and white plumage. The billboard also shows images of volcanoes and forests in Costa Rica, with the tagline, “Discover Costa Rica”.

The image is believed to be a composite of the Ara Ararauna (known as the blue-yellow macaw, native to South America) and the Ara Macao, the scarlet macaw living in Costa Rica and possible even crossed with the Ara Ambigua, the great green macaw that lives in the country and is in danger of extinction.

Asked about the error, Rodriguez replied, “we are investigating and when our advertising executive returns from Span we will have clearer details”.

The marketing director added that they discovered the error once the billboard went up, adding that ally Corte Inlgés has its own marketing team and advertising agencies to develop campaigns.