Puriscal Hotel That Burned Down Had An Eviction Order Against It 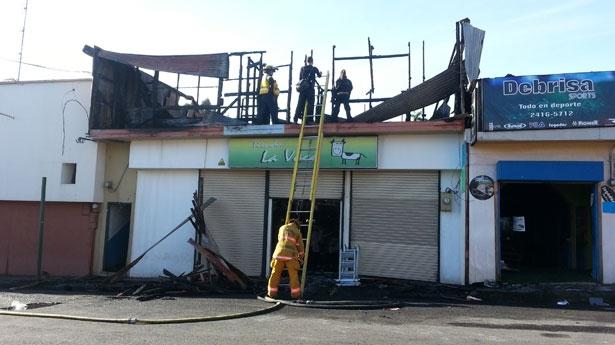 What really happened in Puriscal in the early hours of Friday morning fire that caused the death of five and critically injured several others? Fire Chief, Hector Chávs, says that poor conditions of the building made it a death trap.

Cháves explained that the lack of an alarm and smoke became lethal elements for the victims of the fire. The Fire Chief said the victims were unaware of the fire that began shortly after 1:00am.

In addition, locked metal doors, narrow hallways, a garage door that did not work and that the only emergency exit  blocked, all contributed to the tragedy.

Preliminary investigations points to a faulty electrical system causing the fire. The Fire Department said that fire probably started at the front of the building, due to exposed and worn electrical wires.

Investigators said they were concerned to the speed in which the fire spread. Even more worrisome is that the conditions found at the Las Aguilas hotel is not isolated, rather is similar to many other properties around the country.

Authorities say the owner of the hotel is responsible for what happened.

The Ministerio de Salud (Ministry of Health) had ordered the hotel closed. Salud officials say that they received an anonymous complaint against the hotel last September and confirmed the unsanitary conditions on first inspection. A second inspection by a civil engineer uncovered problems with the electrical system.

With other code violations found, on December 19, 2012, Salud issued an order for the closure of the hotel. But, the owner  requested and was granted an extention to make improvements and conform to code, so long as the building was not occupied.

The order by the Ministerio de Salud called for a total closing of the hotel by January 30, 2013, and had coordinated with the Fuerza Pública (police) to evict on February 11.

QCOSTARICA - The spike in cases of covid-19 in recent days set off the alarms and has the authorities analyzing the possibility of bringing...
Argentina

Q24N (Buenos Aires) Nighttime driving will be prohibited in Argentina as of this Friday and for three weeks, a measure that is applied for...
Alajuela

QCOSTARICA - A large fire in a plastics warehouse in Alajuela has firefighters working since the early hours of this Thursday, April 8. The alarm...
Front Page

QCOSTARICA - Coriport, the company that manages the Daniel Oduber Quirós International airport (LIR), in Liberia, Guanacaste, claimed the State for compensation of US$600,000...
Electric Vehicles

TODAY NICARAGUA – If he wins the presidency of Nicaragua, the first international trip that presidential candidate Arturo Cruz would make would be to...
Health

QCOSTARICA - The contagion or "R" rate for this Monday in Costa Rica reached 1.45, according to the analysis carried out by the Universidad...
Vaccine