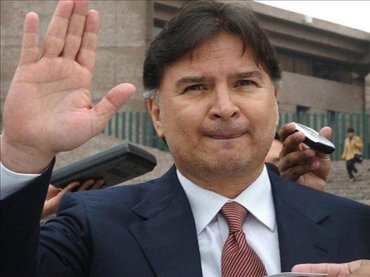 Declassified US State Department cables document how Alfonso Portillo, the former president of Guatemala who recently pled guilty to money-laundering charges in New York, refused a plea deal following his arrest to chance his arm in the corrupt Guatemalan justice system.

Hours after Portillo’s arrest in January 2010, Stephen McFarland, then US Ambassador to Guatemala, met with Carlos Castresana, head of the International Commission Against Impunity in Guatemala (CICIG), to discuss the arrest of Portillo and the offers made to him to accelerate the judicial process, reported Plaza Publica.

A cable sent to the Department of State in Washington (pdf) says Portillo had been presented a choice: He could accept a reduced sentence in Guatemala for his embezzlement of state funds during his presidency, return the 3 million Euros discovered in his family’s European bank accounts, and be extradited to the US to face money-laundering charges. Or, he could remain in detention in Guatemala City’s dangerous Zone 18 Prison while he contested criminal charges and extradition.

According to Castresana, Portillo immediately rejected voluntary extradition to the US, saying he would make his case in Guatemala.

Four other declassified cables also clearly show how the US Embassy was intimately involved with the legal case against Portillo and the work of CICIG, reported Plaza Publica. One cable (pdf), however, said this had implications for Embassy security, as Portillo was accusing McFarland of conspiring against him as retribution for not having supported the Iraq war.

Adding to these concerns, the cable refers to an incident in March 2010, when an anonymous caller claimed to have control over the three judges hearing the case of the US extradition request, and that he would kill their families if the case was not suspended. However, the judges verified their families were safe and the hearing continued.

Despite the strong evidence against him, Portillo was acquitted in May 2011 of stealing $15 million of state funds during his presidency. It would be another two years before he was finally extradited to the US, where he recently pleaded guilty to charges of accepting bribes and money laundering.

Portillo’s decision not to immediately accept a plea reflects the inefficiency and corruption in Guatemala’s justice system. Portillo opted to try his luck in Guatemala, and the decision proved the right one — he won his case.