In 11 Days The Annual Pilgrimage Begins 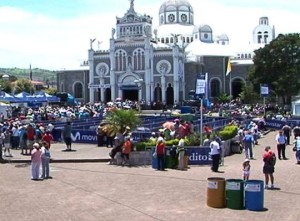 In less than two weeks hundreds of thousands will be making their way to Cartago, as Catholic faithfuls embark in the annual pilgrimage to celebrate the apparition of the Virgen de los Angeles.

Although the masses will head to the Basilica de los Angeles on August 1 and 2, it was evident that some took the good weather this weekend to make their journey early.

“Romeros” could be spotted on Saturday and this morning Sunday in the area of Tres Rios, Ochomogo (all east of San José) and at the Basilica de los Angeles itself.

The Fuerza Pública and the Cruz Roja (police and Red Cross) have begun to set up checkpoints between Curridabat and Cartago.

For now, romeros are being asked to be extremely careful as they will have to share the roads with cars and trucks until such time as the Policia de Transito (traffic police) apply road closures, which will depend on the number of romeros ahead of the anticipated August 1 date.

QCOSTARICA - The President of Costa Rica, Carlos Alvarado, described the persecution of Nicaragua President Daniel Ortega against opponents as reprehensible after the government...
Entertainment

To become a successful gambler in the online industry, there is a lot to cover. It can be known to be a vastly different...
Tourism