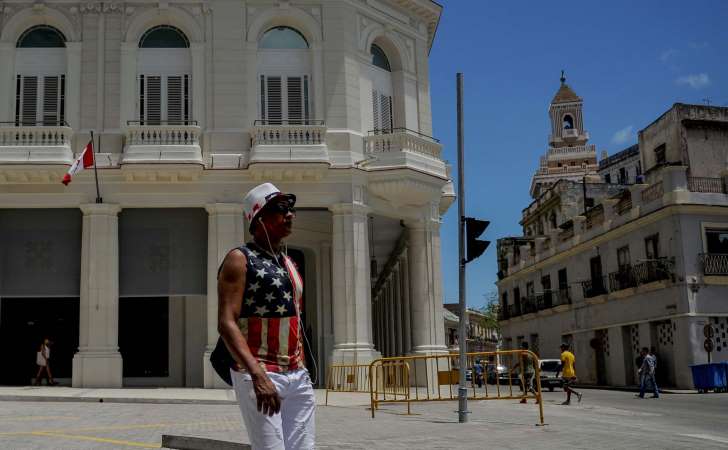 © Yamil Lage/AFP/Getty Images A man wearing a T-shirt with a U.S. flag design walks along a street of Havana on June 16, 2017.

TODAY CUBA, HAVANA — Cuban families gathered anxiously around their television sets in March 2016 when then-President Barack Obama made his pitch to the Cuban people at the Grand Theater in Old Havana.

His message, mostly about restoring ties between the American and Cuban people and healing half-century-old divisions, stirred up a lot of emotions. Tears were shed. There was catharsis.

Fewer Cubans seemed to tune in the speech, though it was broadcast live on state television by the Venezuela-based Telesur network. But as word began to trickle out that Trump was “canceling” his predecessor’s Cuba policy, the mood in Old Havana’s booming tourist quarter turned foul.

A bartender at a Harley-Davidson-themed café shook his head in disbelief as he talked by phone to a friend who’d seen the speech. A cashier at a doughnut shop called the American president something unprintable.

Few areas of the city have been so physically and economically transformed by the easing of U.S. travel restrictions as the touristy part of Old Havana, a major beneficiary as the number of American visitors to the island has grown threefold. Both the communist government and private entrepreneurs have been trying to get in on the gold rush. It’s been one of the few bright spots in an otherwise stagnant, state-dominated economy.

GAESA, the military-affiliated Cuban mega-corporation that Trump’s new policy aims to deprive of U.S. dollars, had assumed control of Old Havana’s state-owned hotels and restaurants since Obama came to town. Just across the park from the theater where Obama spoke, GAESA’s subsidiaries have partnered with Swiss luxury chain Kempinski to open a $500-a-night hotel atop a new luxury mall that sells $3,000 Mont Blanc wristwatches.

But private business owners and investors in Old Havana have been getting more than crumbs. Driven largely by a boom in Airbnb rentals, entire city blocks of decaying century-old buildings are under renovation, racing to reopen as privately owned hostels and restaurants.

Ernesto Castillo has been banking on the boom to continue. With his future Peruvian-themed restaurant still a construction site, he didn’t have time to watch Trump’s speech, but he said he’d been bracing for bad news. “I expected it,” he said with a sigh.

Castillo was trying to stay optimistic. “The tourism business in Old Havana was here before the Americans came, and it’ll still be here if they’re gone.”

Cuba received a record 4 million tourists last year, and of those more than 600,000 were U.S. visitors, second only to the Canadian beachgoers who favor the island’s tourist resorts.

Of those, nearly 300,000 were non-Cuban American travelers, and this year that category of U.S. visitors has been on pace to double again.

While those American visitors accounted for only about 7 percent of Cuba’s tourists last year, they have a disproportionate impact on the burgeoning private sector of Havana’s tourist economy, unlike the Europeans and Canadians who gravitate toward government-owned resorts.

“Everyone knows that Americans are the biggest spenders and leave the best tips,” said Castillo.

Fueling the explosive growth in U.S. travel was Obama’s move authorizing Americans to travel independently — without a tour group — as long as their activities were broadly educational and brought them into contact with ordinary Cubans. Instead of riding around in buses with government-appointed tour guides, U.S. visitors could mostly do whatever they wanted, knowing there was little chance they’d get in trouble with U.S. authorities if they spent a day at the beach or went out dancing.

Now Trump’s reversal will take special aim at those travelers and will force American visitors back to the authorized tour providers who work with Cuban state-run tourism companies. Fewer independent U.S. travelers is likely to mean fewer dollars for independent Cuban businesses.

Of about a dozen Cubans asked about the Trump measures Friday, Luis Cardenas, 25, was the only one in Old Havana who applauded it. A large American flag flapped on his handlebars as he peddled the narrow streets, laboring in the sticky heat for a meager living. “I’m sick of the Castros,” he said. “They’re getting rich from all these tourists.”