Independence Day Celebrations Around The Corner 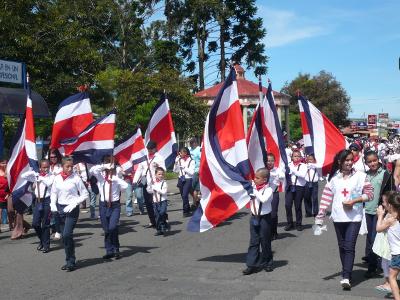 Plans for the 192nd anniversary of Independence Day for Costa Rica are nearly solidified, at least for San José. School children from the 16 elementary schools and high schools chosen to march Sept. 15 will get the day after off  to compensate for being required to observe the holiday. 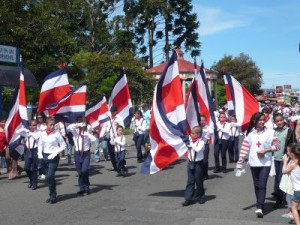 Route of the march will extend from Parque Merced on Second Avenue to the CCSS (Caja) building). “Each school will organize their own march of lanterns and other observances during the month,” said Giselle Cruz, coordinator of the patriotic festival commission.

Costa Rica was far from the center of action in Guatemala when Central Americans decided to follow their cousins to the south in separating from the tottering Spanish Empire in 1821 at a series of meetings in Guatemala. To symbolize this late arrival of the news, a torch is carried through Central America.

The passage of the torch is reminiscent of the Olympic Games torch’s journey. Education Minister Leonardo Garnier will be on hand at the northern border station of Peñas Blancas to receive it and send it on its last leg of the 376 kilometer journey to Cartago, the old capital of the country.

This is the official kickoff of the celebration Sept. 13. President Laura Chinchilla will receive the torch at Cartago and lead the country in the singing of the national anthem at 6 p.m. The route of the torch will take 36 hours with the participation of some 20,000 persons including the Red Cross and the Traffic Police.

Both students and teachers are required to march in parades — student losing points on their conduct section of their report cards and teachers a reprimand for an unexcused absence on a workday. (Some San Jose area school principals consider this unwise because they told La Nacion that the day should be one of celebration and not obligatory.)

Showing that this country is still conservative, girls involved in the marches are prohibited from wearing miniskirts as they wield their batons. In this, they differ from U.S. high school marching formations at civic celebrations.

Foreigners attending these marches should be warned: They tend to be tedious and sometimes poorly coordinated, being more that of school kids standing around waiting for things to get going than marching. Indeed, most of the observers lining the routes have children or relatives marching. At times it is a case of, “Oh, look! Everyone’s out of step except my boy!”

The evening of Sept. 13 the marchers are children carrying lanterns. When this tradition first started, the lanterns were homemade of paper with a candle inside. They usually caught fire before completing the parade route.

In latter years, they are bought ready made, safer but less imaginative in design. A later tradition, begun in the late 1970s after Nicaraguan dictator Anastasio Somoza threatened to invade this country, is the singing of the national anthem in the evening. When it first began, people stopped their cars on the streets, got out and sang to each other, accompanied by their car radios.