How to Cut in Line in Costa Rica 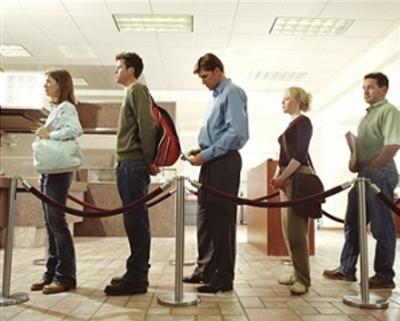 Standing in line (or queuing up) for long periods of time is a staple of life in Costa Rica, but not everyone is willing to readily accept this social convention. Complaining about the inefficiency of services offered by Costa Rica’s public and private sectors is a national pastime, which is actually better enjoyed at while standing in a long and serpentine line, but there a few time-management mavens who have little patience for such mundane endeavors. 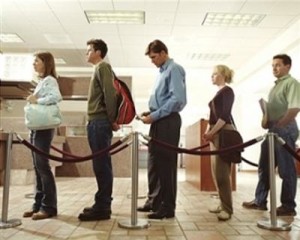 Cutting in line is the ultimate kiss-off to the queuing phenomenon, which by all means should not exist in the 21st century. It is clearly anti-social behavior commonly associated with miscreants and scoundrels, but the several levels of sophistication involved offer a fascinating glimpse into the human psyche. In Costa Rica, line cutters and queue jumpers may not be simply motivated by the convenience of avoiding wasted time; there may be issues of narcissism, as well as an affinity for demeanor that challenges social convention.

The Costa Rica Star does not advocate cutting in line; however, looking at the research performed by social scientists in this regard is fascinating.

Jumping ahead of others in line often requires artifice. Some people resort to props such as wheelchairs, crutches and walking canes for the despicable act of faking a disability. Others reportedly “borrow” babies and toddlers to take advantage of social fairness norms in Costa Rica that can get them to the front of the line.

Aside from the slimy acts of fakery described above, some people may seek to take advantage of sociological flim-flams to achieve their wicked queue jumping. Attractive women may flirt with male security guards or employees, and others may use their influence as relatives and close associates of line controllers to prearrange being escorted to the front of the line as VIPs.

As recently reported in the Costa Rica Star, the phenomenon of standing in line has drawn the interest of sociologists, psychologists and behavioral economics researchers around the world. To think that long lines actually exist in other countries (we’re looking at you, United States of America -your lines at unemployment offices and Starbucks are worthy of research, and let’s not get started on Germany) does not bring any comfort to Costa Rica.

It is quite unusual for someone to actually express enjoyment at the opportunity to queue up; but we can assume that such persons exists and that Costa Rica will warmly welcome them with long lines. For everyone else, however, there are certain methods that allow jumping to the front of the line without having to resort to the previously mentioned deceit.

The Art of Persuasive Language

A couple of years ago, consumer behavior blog Strategy Defined wrote an interesting post about persuasive language and cutting in line:

Harvard psychologist Ellen Langer carried out a study demonstrating the power of language – adding one word to a simple request increased compliance rates by 33%.

Langer wanted to demonstrate how changing the structure of a sentence can influence others more effectively. The situation involved a waiting line to use a copy machine, and the researcher acting as someone who needed to cut the line.

The examples provided indicated that using the conjunction “because” followed a simply declarative sentence was likely to convince people to allow queue jumping. To adapt this persuasive speech maneuver to long lines in Costa Rica, a healthy dose of courtesy and complimentary language can be added for maximum effect.

Greasing Palms for a Place in Line

Bribes are the infringements that fuel a culture of corruption and underground dealings in Costa Rica. Bribes are called “chorizos” (country sausages) in the local slang vernacular, and they may work wonders with regard to line-cutting.

A 2006 research study led by Harvard Business School Professor Felix Oberholzer-Gee pondered whether a market for time could emerge from queue jumping.

[…]a team of experimenters equipped with small bills approached 500 people in lines and offered a cash payment of up to $10 to cut in. Would the bribe be accepted? How much would it take to jump the queue? And how would social norms and a sense of fairness play out along the line?

As might be expected, the higher the amount of payment offered, the more likely individuals were to allow a stranger to cut ahead of them. The surprise? The line-holders allowed the person to cut in but most wouldn’t accept the money in return. (Students and women were more likely to pocket the cash.) Oberholzer-Gee took this to mean that people will allow cuts if they perceive the queue jumper has a real need to save time, though most people felt it inappropriate to cash in on that need.

Would this social breaching experiment work in Costa Rica for the purpose of cutting in line? The Costa Rica Star does not encourage anyone to try it, but there is a chance that the results would be similar given the generally positive attitude of Ticos with regard to helping others.

So first I thought that this was not an example of a missing-markets problem at all. But I was wrong. You can “purchase” a position in the line, but the people who let you cut in will not accept your money. Their behavior is motivated by a norm that says you should help others when they are in need, but you must not exploit this situation.

The reason is that the helping norm applies to unusual circumstances. Other research shows that individuals are more likely to help if the person in need bears no responsibility for his situation. But what I did is clearly different. Arriving late at a train station and banking on others’ willingness to help me cut in line violates the norm. From a social point of view, this is quite ingenious. In groups with helping norms, there will always be some people who try to exploit the friendliness of others.