(QCOSTARICA) Mayden Chamorro still doesn’t understand why a man has left her used female underwear outside her home every Thursday.

Could it be part of a witchcraft ritual?

Chamorro, a resident of Villas de Ayarco, in La Unión de Cartago, has been living this nightmare since last July. She has already filed a report with the Organismo de Investigacion Judicial (OIJ) and plastered the yet unidentified man on her social networks.

Since the problem began, Mayden has thought that it is a person with some kind of sexual obsession or fetish, but in recent days she has received comments that it could be something else.

“Two girls told me that they take that as an act of witchcraft (brujería in Spanish). They say that Thursdays have a certain meaning to do rituals and that it may be that he is trying to do something (spell wise) against me,” she explained.

“A girl commented that I can buy as some protection stones or something like that, but I have not come to feel that I need protection of that type,” she said.

A situation like this would raise the hair on anyone’s neck, but it is not the case of Chamorro, who said that being the subject of alleged witchcraft has not managed to steal her peace.

“I believe a lot in God and in the power of prayer, so I feel that if it is something of witchcraft I know that for God there is nothing impossible and that is why I protect myself with prayer,” she added.

Of course, Mayden decided to inform herself and read several articles on the internet; found that the suspect might also intend to hex (curse) her.

“What I found (online) said that generally, it was the woman who did this to her sentimental partner, not so much the other way around, but a girl told me that they were making hexing here through underwear,” she explained.

Mayden says that at the moment she has no plans to cleanse her house or contact an expert in witchcraft because she has enough and God’s protection is enough for him.

“Many people tell me that they have me in their prayers and that they are looking forward to this man being arrested,” said Mayden Chamorro.

For her part, Vannessa Alvarado, a paranormal researcher and criminologist, explained that Thursday is indeed a day that bears a certain relation to witchcraft, but she assured that, from her experience, in this case, there are no rituals involved.

“I think that has to do with someone’s fetish, an obsession; I don’t feel it has to do with witchcraft and I speak as a professional criminologist, not the paranormal investigator. Well done witchcraft works are hidden,” Alvarado said.

A lot of support

After the case was made public, Mayden says she’s  received messages of support, especially from women who have experienced similar situations.

“There are women who tell me about experiences in which they were also harassed: two told me that there was a time when someone stole their washed underwear, that they had to stop hanging it out on the line in the yard,” she details.

“In comments, I saw several women who said the same and also people who said that in rural areas that was normal, but that is not normal in any area, because that is harassment,” she emphasized.

There has also been no lack of people who have made rude comments, some have even sent Mayden nasty messages, but she ignores them. 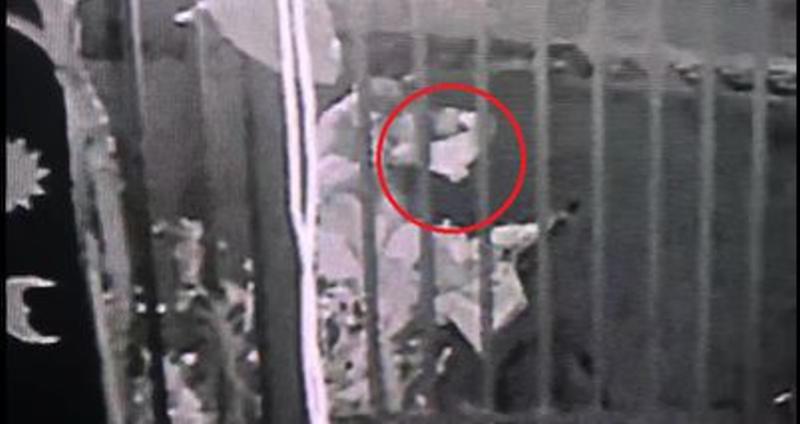 Aside from that, the rest of the messages have been positive with recommendations and offers of help, like that on woman offering to organize a vigil and try to catch the guy in the act, yet another, from a motorcycle member offering “to do me the favor of patrolling or passing by my house on Thursdays”.

“Several people have told me that they want to lynch him and things like that, but that’s not the idea, what I want is for them (police) to arrest him and ask him where he gets the underwear from,” she explains.

He was back on this Thursday

And as expected he was back yesterday (Thursday, September 24).

Mayden had believed that with the news that she had filed a complaint with the OIJ, the man would stop. But he did not.

In fact, Mayden Chamorro said began to feel uneasy since the night before, however, her neighbors began walking the dogs near her house a little later, in case the man happened to arrive.

“I noticed a lot of movement at night … at 1 in the morning someone passed by on a bicycle, my neighbor’s dogs alerted us, I turned on the lights, when I checked the camera I only saw one person, I didn’t pay much attention to him because it happened very fast, but he waited for the dogs to shut up and the lights to turn off.

“In reviewing the videos I saw that it is the same bike and it matches the man,  as far as I know, it’s the same person,” she said.

“Although the news went viral, I am worried that he would return, I am scared by the obsession he has with leaving the underwear, I thought he would not come again,” said Mayden.

The woman is also disappointed that the promised police patrol never was.  “Checking the cameras I saw that the police never came,” said Mayden.

- Advertisement -
Paying the bills
Previous articleA Tarnished Peace in Latin America
Next articleThey will give away 2,000 masks in the Desamparados park

QCOSTARICA - If this had been anywhere else, the head or...
Read more

QCOSTARICA - Sexual orientation is the second topic that...
Tech