An alleged corrupt public sector worker could file up to three appeals and then go to court. The process can take at least six months and even years all the meanwhile receiving their salary

By Rico
3 February 2019
Paying the bills

Corruption in the government of Costa Rica is a real thing. So is the lengthy process of firing an alleged corrupt public employee.

In 2018, corruption was the second cause of dismissal of the central Government. In 199 of the cases of dismissals registered in that year, 61 were for corruption.

The process of dismissing a public sector employee, even if all the evidence is clear, is not an easy one, taking months and even years, because the firing of a public employee is not a simple procedure, much less an expedited one.

The process can take at least six months to resolve in the first instance that starts with an internal investigation and then delayed for months and even years while the appeals processes are completed.

And, while defining the dismissal of public officials involved in acts of corruption, which in some cases, could take up to years to be resolved, workers can be suspended, however, by a resolution of the Constitutional Court, they will continue to receive their salary.

The only way for a quick dismissal is if the employee acknowledges responsibility or a criminal case is opened and the employee is remanded (preventive prison) for more than three months.

And, though some of the institutions have similar names, each is independent and may end up repeating the same procedure as the previous.

One of the bottlenecks in the process is notifications. According to Alfredo Hasbum, director of Civil Service, actions have been taken such as using email and digital signature in notifications of decisions, but these have had no impact on the time to the final decision.

The La Nacion has produced an infograph showing the process, which begins with the minister of the entity (where the employee works) appointing an investigator into the case. 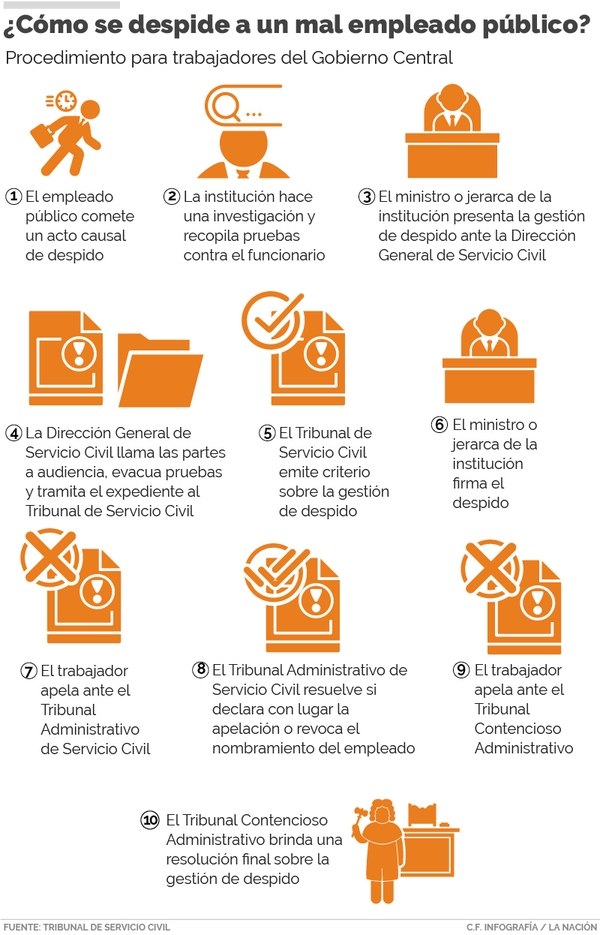 There is no specific timeframe for the internal investigation. An single error could lead to the case being dropped, in which case the employee cannot be submitted to a new process.

The process then continues to the next institution and repeated, each process taking weeks and months to complete. In each step, the corresponding institution has to have found the employee responsible (guilty) before it can move to the next.

If one of the institutions were to find the employee not responsible (not guilty), the process would stop there and cannot be appealed.

Only after all the processes have been completed and ‘dismissal is supported’, the filing Minister now has one month from being notified to fire the employee.