I noticed this graffiti yesterday on Ave. Septima. It must be a satire.

It comments on a sensitive point for the South American nation named after the Genoese mariner who arrived in the Caribbean in 1492, although he never set foot in present-day Colombia. (I’m careful not to call him the ‘discoverer of the Americas’, since millions of people already lived here.) Whether due to cultural prejudice or just sloppy typing, gringos commonly spell Colombia’s name with a U.

Amongst Colombia’s enduring image problems, the difference between an O and a U is one of the most trifling. During Colombia’s big run in this year’s World Cup, that’s manifested itself in foreign celebrities’ crude jokes associating Colombian footballers with cocaine. Dutch actress and UNICEF goodwill ambassador Nicolette van Dam resigned after tweeting a photo showing Colombian football stars snorting lines on the field. Van Dam quickly apologized:uncomfortable or create disgrace in any way.

But the very fact that Van Dam initially saw only humor in the image shows how Colombia’s association with illegal drugs is still widely taken for granted.

More interesting than the vowel that’s employed is why Colombia is named ‘Colombia’ at all, rather than ‘Colonia’, the logical derivation of the explorer’s Spanish name, Cristobal Colon (Christopher Columbus in English, and perhaps the reason fro the constant mispelling). The country’s name comes from the explorer’s Italian surname, Cristoforo Colombo (in Italian). That’s probably lucky, since ‘Colonia’ would undoubtedly generate more than its own share of bad jokes.

Adding to the incorrect spelling are names in the United States like Columbia University in New York, Columbia College in Chicago or City of Columbia in South Caroline. In Canada, one of its provinces is named British Columbia.

Even U.S. presidents have made the mistake. In 1973, the Nixon administration gave Colombia a lunar rock collected during the Apollo 17 landing on the moon. Along with the rock was a metal plaque that sits in the Bogotá Planetarium. It reads: “Presented to the People of the Republic of Columbia. Richard M. Nixon.”

Big outfits including Virgin Mobile, P.F. Chang’s and Lufthansa—and performers including Justin Bieber and Ozzy Osbourne—have all in the past year committed this boo-boo, which really annoys Colombians. They have spelled the country’s name with a “u” the way you would spell Columbia the university, or the sportswear company, or the U.S. capital, Washington, District of Columbia.

But, Colombians are fighting back by linking up with a movement called “It’s Colombia, NOT Columbia.” 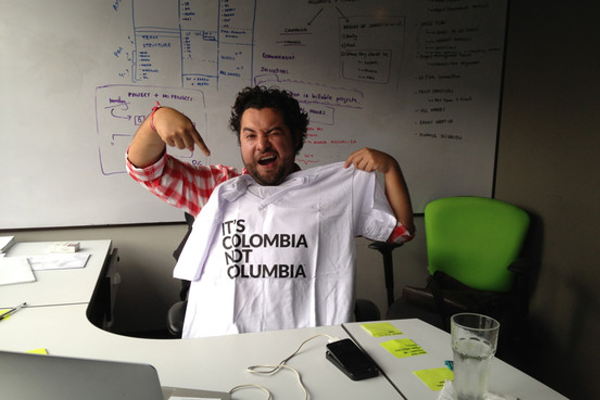 Carlos Pardo, a digital-media executive, helped create the “It’s Colombia, NOT Columbia” campaign last year at a global social media event. Initially a lighthearted presentation for Zemoga and Compass Branding, digital media and marketing firms in Bogotá, it has become a force all its own. Make the mistake on social media and you are very likely to be corrected.

“We’re not trying to insult the people or companies that make this mistake,” says Mr. Pardo. “We don’t say ‘Hey, idiot, fix it!’ We just say ‘Dear so-and-so, it’s Colombia, not Columbia.’ ”

Ozzy Osbourne and his band, Black Sabbath, both spelled Colombia with a u in promotional postings for their concert here in October. And Canadian-born teen-pop idol Justin Bieber announced his October concert on Twitter by misspelling the country. Adoring Colombian girls flocked to the show anyway.

Still, the movement can take its nagging too far. When a television show about plans Starbucks SBUX +0.09% has to come to Colombia misspelled the country, many here quickly blamed Starbucks itself. Hundreds of Colombians, with national pride on display, used it as a rallying cry to urge the company to stay away.

Starbucks said it wasn’t to blame. “Our 42-year heritage with Colombian coffee farmers dates back to Starbucks’ 1971 founding. We definitely know the difference between Colombia and Columbia,” the Seattle company said in a statement.

QCOSTARICA - For today, Saturday, September 11, there are...
Reports