(QCOSTARICA) It’s that time of year again. It snuck up quickly this year, November 1, when the following year’s Marchamo becomes known.

Starting this morning, the INS website publishes the cost of the 2017 Marchamo – the annual circulation 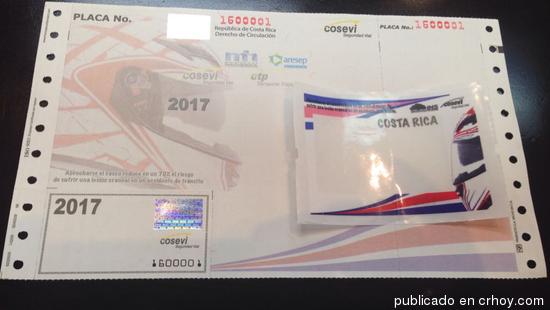 permit for every registered vehicle in the country, some 2.1 million at last count.

The Marchamo, due payable by December 31 of each year, includes items like property tax on vehicle (the single largest portion of the cost) and mandatory insurance, among other items. The Marchamo also includes outstanding traffic tickets.

To find out what you own on your vehicle(s), go to the INS website. In addition, the information is available by sending a text message at 1467 with the word “marchamo” and the license plate number in the message or calling 800MARCHAMO (800 6272 4266).

The Machamo is payable online or in person at more than 2.262 point of sale (POS) online, at banks and financial institutions; even at supermarkets like Walmart and Masxmenos by way of Servimas and many other places.

The Q recommends waiting a few hours or even a day or two to avoid the online rush for the information. Posts on social media this morning, moments after the 7:00am when the INS portal opened, had people saying thinks like, “worthless, the website is down”

Back to the cost of the Marchamo, almost two thirds (69%) of the total cost is property tax, the tax applied to vehicles based on their “fiscal” (tax) value set by the Ministry of Finance (Ministerio de Hacienda).

Despite the belief by many that the fiscal value is etched in stone, Hacienda does have a mechanism in place for a review and appeal. The fiscal value for each vehicle can be found at the Hacienda website.

The government expects take in ¢154 billion colones in tax revenuew from the 2017 Marchamo.

The next single highest cost is the Seguro Obligatorio de Automóviles (SOA) – mandatory insurance that covers third party liability, representing 19% of the overall cost of the Marchamo. The SOA for 2017 is ¢21.564 colones for all passenger vehicles regardless if it is new or old.

Included in the SOA cover of medical costs and death in a traffic accident, with maximum coverage ¢6 million million colones. For additional coverage, vehicles owners need to by a separate policy.

The balance of the Marchamo is made of up special taxes and outstanding traffic fines, including municipal parking tickets.

Important note: it is required your vehicle to have the Riteve (vehicular inspection) current to pay the Marchamo. If your vehicle does not have the current sticker, make an appointment to get your vehicle inspected, after which the Marchamo is payable a day later. Remember, that starting January 1 the outstanding Marchamo begins to accrue pretty steep penalties and interest.

Transito seized more than 11,000 pairs of license plates from vehicles during the holidays

Fake massage parlor was used for sexual services in Guadalupe

HQ - A 42-year-old woman, a Venezuelan national identified by her last name Padilla Mujica, was detained by agents of the Organismo de Investigación...
Health

QCOSTARICA - At 7 am this Wednesday, the first 43,200 vaccines against covid-19, developed by AstraZeneca and the University of Oxford, arrived in Costa...
Venezuela

Q24N - In a harsh tone, the President of Venezuela, Nicolás Maduro, did not spare insults to his Brazilian counterpart, Jair Bolsonaro, during a...
Culture

PURA VIDA - The Ministry of Labor  (Ministerio de Trabajo) reported Tuesday that, for the public and private sectors, the April 11 holiday that...
News

Costa Rica to sign up “Influencers” to promote tourism

QCOSTARICA - Best Place to Travel in 2021 (Costa Rica) was the title chosen by influencer Rob Strok when he released an eight-minute video...
Alajuela

QCOSTARICA - A large fire in a plastics warehouse in Alajuela has firefighters working since the early hours of this Thursday, April 8. The alarm...
News

QCOSTARICA - Starting today, Monday, April 5, Costa Rica's land borders with Nicaragua and Panama will be gradually opened. Tourists who do not require an...
Health

QCOSTARICA - The Minister of Health, Daniel Salas, said on Tuesday during the press conference from Casa Presidencial, he will go to court to...