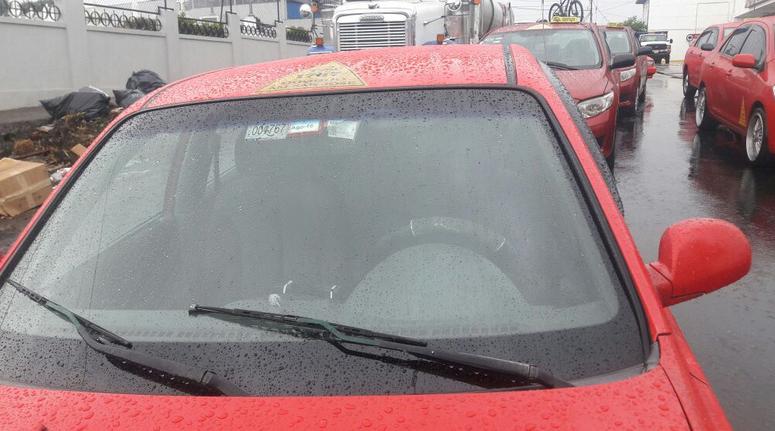 (TICO BULL) The hooligans, also known as official taxi drivers or ‘taxistas’ in Spanish were out in full force this morning, in their intent on bringing the government of Luis Guillermo Solis to its knees, for being soft on NOT stopping Uber.

The taxistas, for the longest time, have been a force to be reckoned with. Nobody has wanted to mess with them. They have shown over and over they can quickly unite in a single cause, be it against Uber or in an assault on one of their own.

But today was different. From the early hours, the President, his Security Minister, Chief of the Fuerza Publica (police) and the Policia de Transito (traffic police), among others, began their day early, around 4:30am, hours ahead of the planned start of the taxi protest, to set in a motion a quick and decisive plan of action against the threatened violence.
And so it was. Within minutes of hitting the streets the police were on them. In San Pedro, by the San Pedro mall, the favourite location for most protests, some of the taxistas literally hit the ground when taxi blocked the intersection and a small group started beating on a police officer, cutting his lip and knocking out three teeth, in the first (and as it turns out the only serious) confrontation.

In the area of the airport, as on the Ruta 27 by Escazu and in the area of La Galera (Curridabat on the east side) the riot squads quickly moved the taxis to a side, making room for vehicles to pass. It was slow, but the blockade was broken. Authorities showed their muscles, they weren’t afraid of the hooligans.

President Solis stood by his word, refusing to talk if there blockades and violence. Even the regulator of public services would only set a meeting for next Monday after hundres of taxistas gathered in front of the Guachipelin offices.

In the end, 78 taxistas were arrested, 33 vehicles seized and 119 drivers fined for all kinds of infractions, from blocking traffic to not having their vehicle’s paperwork in order, even some with expired drivers licenses.

By noon it was all over.

At noon the television cameras could only repeat what had happened in the morning, as there were no blockades, and the only taxis on the roads where the ones working, picking up fares.

This had never happened before.

The brave men and women of the Fuerza Publica and Policia de Transito did their job well, they have to be given much of the credit, mobilizing quickly, stopping the hooligans before things really got out of hands. A job well done.

To save face and keeping in line their hooligan mentality, a number of taxi drivers promised to be back, the next time ready for “war”.