Johnny Araya “Does Not” Have A Harvard University Degree As Claimed 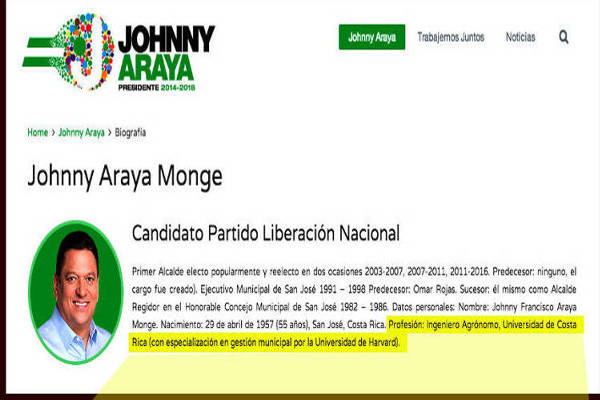 Presidential candidate Johnny Araya was quick to change his biography on his official campaign website, removing reference to a holding a Specialization in Municipal Management degree from Harvard University, following being called out by a report in El Financierio (EF).

The business publication arm of the La Nacion confirms that Araya never actually received any degree from the Harvard University.

EF says that in actuality, the former mayor of San José and now a candidate for the presidency of Costa Rica only attended a month long seminar for mayors of Latin America an the Caribbean, held in 1992, in which he was awarded a participation certificate for completing the program.

This is not an academic degree, as confirmed by the Harvard University.

EF says it asked journalist Fernando Fernández, communications manager for the Araya campaign, on the claims in the biography of the presidential candidate. In a telephone interview with EF, the journalist accepted the “imprecision” and saw that it would be removed from the Araya official website.

We are all mentally exhausted by sitting in our...
Cine (Movies)