“Josefinos” Litter Up To 17 Tons Daily

COSTA RICA NEWS — Street sweepers collect some 17 tons a day of bottles, plastic bags and flyers, among other litter, from the streets, sewers and ditches of San José. That is enough to fill a truck. 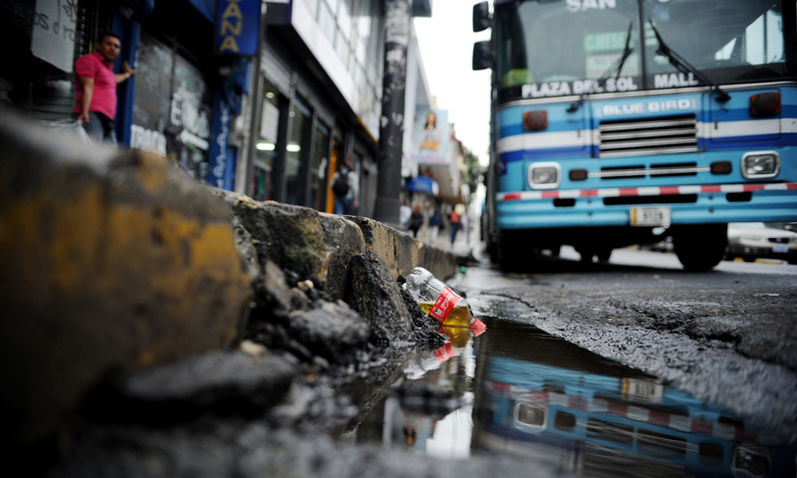 Municipal officials blame pedestrians and businesses and the “josefinos’ (residents of San José) lack of culture for the accumulation of the trash on the streets of the capital city, that is also responsible for the flooding during heavy rainfall.

“People litter not for the lack of receptacles, but for lack of education. Mainly its people over 40,” said Rafael Arias, advisor to the San José mayor’s office.

Another common practice is that of businesses of throwing trash into the streets, that ends up in the sewers, adding to the problem. Arias says many downtown merchants throw out their trash on the street on days there is no garbage pickup.

“In several cases, it has been determined that the floods occur due to the trash in the storm sewers, demonstrating lack of maintenance and mishandling of solid waste,” reads the 2013 study.

Guillermo Loría, Lanamme engineer, says “with some sewers the is problem can be solved by simple maintenance, in others the city should carry out enforcement actions.”

The solution, although it may seem simple enough, is complicated. It means people not throwing trash on the street – or out a car and bus window, use a garbage bin or pocketing the candy wrapper, for example, until one is found, and not taking the attitude that it’s some else’s problem.

A walk of the Sabana park, for instance, demonstrates the lack of culture and municipal actions. Overfilled trash bins are not uncommon, neither is finding litter next to or very close to an empty receptacle.

At home, sweeping the sidewalk and picking up litter, putting out the garbage on the curb the same day it is picked up and not the night or days before, even using containers for same.

If everyone pitches in, we could live in a cleaner city!

QCOSTARICA - The value of Costa Rica exports increased by 23% in the first five months of the year, being the highest growth in...
Cine (Movies)

QCOSTARICA - A Costa Rican tried to enter the country through the Juan Santamaría International - San Jose Airport - with US$153,244 (the equivalent...
Pura Vida