Journalists at risk in Latin America 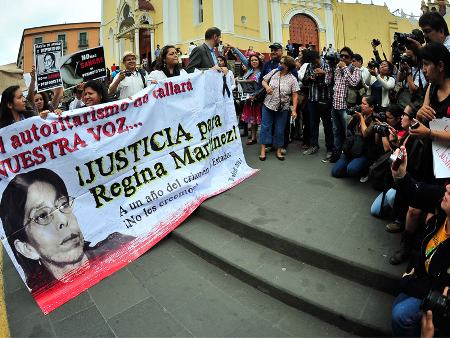 Infosurhoy – How dangerous has practicing journalism become in Latin America? Since the start of 2012 until the end of June 2013, an average of more than one journalist a month has been killed for doing his or her job.

A total of 20 journalists in Latin America have paid the ultimate price for the freedom of speech in six countries during that time span, according to Reporters without Borders (RSF).

Twenty journalists in Latin America have paid the ultimate price for the freedom of speech in six countries from Jan. 1, 2012 through June 2013, according to Reporters without Borders (RSF)

However, Honduras’ total could grow, as the list doesn’t include journalist Aníbal Barrow, a news anchor on Globo TV whose remains were found by Honduran police in the northern city of Villanueva on July 9. Barrow, 58, was abducted by gunmen on June 24 in the city of San Pedro Sula.

Meantime, RSF is trying to determine whether the murder of photographer Luis Choy Yin Sandoval, who was fatally shot outside his Lima home on Feb. 23, was linked to his work for the Peruvian daily El Comercio.

RSF includes a journalist’s murder on its list after the organization determines “the victim was killed because of his/her activities as a journalist. It does not include cases in which the motives were not related to the victim’s work or in which a link has not yet been confirmed,” according to its website.

In 2012, the 15 killings of media members in Latin America represented 16.9% of the 89 journalists slain worldwide, while in 2013, the five deaths in the region represent 18.5% of the 27 journalists who have been murdered throughout the world as of July 15.

“Violence against journalists in Latin America is no longer a threat, but rather an appalling reality that is causing massive self-censorship in countries such as Mexico, Honduras, some areas of Brazil, Peru, Paraguay and Colombia, where criminal routes of drug traffickers have already been established as a force,” said Claudio Paolillo, president of the Committee on Freedom of the Press and Information of the Inter American Press Association (IAPA).

Paolillo said the killing of journalists is a direct attack against freedom of speech throughout the region.

“The death of a journalist implies that citizens, as a result of this crime, will be much less informed about issues that might interest them,” he added. “And it is not just because the murdered journalist can no longer report, but because colleagues will fall into a system of self-censorship, consciously or unconsciously, because they will not want to suffer the same fate as the person who died.”

Benoît Hervieu, the director of RSF’s office for the Americas, divides the region into two groups, with each one posing major obstacles for journalists.

The first is made up of countries mentioned by Paolillo that have high rates of violence, organized crime and narco-trafficking. The second is formed by countries with strong political bias, such as Venezuela, Bolivia, Ecuador and Argentina.

“They are countries where, in the 2000s, the population voted for new governments,” Hervieu added. “They quickly had a strong confrontation with the traditional press, which is aggressive and questioned the legitimacy of these governments. This made polarized situations and political confrontations appear, which have serious effects on pluralism, public debate and the balance between the different faces of opinion.”

Laura Tresca, the officer for the Freedom of Expression program of the organization for the defense of freedom of information (Article 19) in Brazil, said lawsuits against journalists are another common threat that’s carried out throughout South America.

“Sometimes, just responding to a criminal case ends up inhibiting [the journalist] from speaking about the problem,” Tresca said.

Recent threats against journalists covering sensitive issues in Latin America illustrate how difficult it is for members of the media to do their jobs without fearing for their lives.

In the Colombian city of Valledupar in the department of Cesar, eight journalists covering the restitution process of lands dominated by the Revolutionary Armed Forces of Colombia (FARC), conducted by the government, received death threats in May. In a letter, the Group against Land Restitution gave journalists 24 hours to leave the city.

In the same month, journalists León Valencia, Gonzalo Guillén, and Ariel Ávila opted for exile after the Colombian government discovered an assassination plot against them.

Self-imposed exile also has been a common option among Mexican journalists. Mexico ranks eighth in the world – and first in Latin America – in these cases, with three journalists forced into exile between June 2012 and May 2013, according to a ranking released last month by the Committee to Protect Journalists (CPJ).

“I will never return to investigative reporting because of the lack of protection on the part of the Mexican government, which should ensure the safety of my family and my freedom of expression,” Basurto Gamero said in a video released by RSF. “Unfortunately, many journalists live in fear while working.”

Hervieu added that in many countries, including Mexico and Brazil, threats also come from the authorities when law enforcement agents don’t arrest suspects in cases of violence against journalists.

“When they see that nothing happens to the murderers of their colleagues, journalists decide, in many cases, to stop informing and investigating,” he said. “The result is a disaster for freedom of information.”