by Rico
24 December 2013
201
Share
Facebook
Twitter
Pinterest
WhatsApp
Linkedin
ReddIt
Email
Print
By: Arianna McKinney, Vozdeguanacaste – We stood at the top of a dark opening, looking at the curve of a metal ladder that disappeared down into the hole. Two guides tightened our harnesses and secured us to a rope for the descent, 17 meters (55 feet) down into the entrance of Terciopelo, one of the 42 underground caverns that have been discovered so far in Barra Honda National Park. 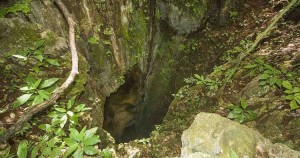 The caves are made of calcite or calcium carbonate. Originally they were coral reefs, with layers of microorganisms and mineral deposits gradually forming the caves due to pressure and high temperatures, helped along by seismic activity from the Coco and Caribe tectonic plates, over a period of about 70 million years, according to the park’s administrator, Dorian Mendez Guevara.

The indigenous Chorotega used the caverns for human sacrifice, Mendez related, as evidenced by bones and other artifacts found there. In more recent times, the land was used for cattle ranching and agriculture until 1974, when the 2300-hectare (5683-acre) national park was formed. The park benefits the nearby communities of Barra Honda, Santa Ana and El Flor, and an association of local guides from these three towns are in charge of taking people to the caves, as well as serving as forest firefighters.

Jose Angel Rosales Acosta, one of the local guides and firefighters from El Flor, remembers playing in the area and riding horses to round up cattle before the land was converted into a national park. Around 1965, when the land was still privately owned, members of the mountaineering club from the University of Costa Rica began exploring the caverns professionally. Since the government bought the land and formed the park, Rosales said it has changed completely, for the better, as people have learned to take care of the land.

The park is home to approximately 28 species of bats, 17 different amphibians, 86 types of birds and about 23 mammals. National and international research is currently being conducted in the park regarding the caverns, the birds, the butterflies, the trees and the bats. About 100 people per year participate in the park’s volunteer program, mainly from Europe and Canada, who help with things like park maintenance and environmental education programs.

Down inside the cave it is a little muddy and cool, but Mendez tells us that it will soon dry up and that it is typically hot in the cave. He shines a flashlight around to point out long icicle-like stalactites, which take an average of 5000 years per centimeter to form. Some formations look like drapes, others supposedly like papayas, and others like popcorn. We see one rock that glitters as we continue to descend. We go down another ladder into the second hall, and at this point we have descended a total of 72 meters (236 feet). Here we turn off headlamps and flashlights to experience complete darkness. It is a very natural, authentic caving experience.

Of the caverns, visitors are only permitted to enter two, Terciopelo and Cuevita, a smaller cave that is more accessible for children. Other caverns can be seen from above on a hiking tour. After we climb back up the ladder and out of Terciopelo, a good workout, we head to another of the park’s attractions: the Nacaome Mirador (lookout). From this vantage point, we can see the expansive valley surrounded by reforested hills and the Golf of Nicoya, Isla de Chira and other islands. It is breathtaking.

Getting to the caves involves walking 3.5 kilometers (2.2 miles), much of it uphill, but during dry season you can drive halfway up and park. The full hike is strenuous and the guided tour lasts at least four hours, so plan to start early. Good hiking shoes and mosquito repellent are recommended. Helmets and headlamps are provided, but you may want to bring a change of clothes or flashlight.

To get to Barra Honda National Park from Nicoya, continue straight past the Burger King where the road turns to gravel and go about 12 kilometers (7 miles), following the brown national park signs. The park is open every day from 8 a.m. to 1 p.m. for visiting the caves and from 1 p.m. to 3 p.m. to walk on the trails. Cost including the caves is $25 for foreigners or $15 for nationals, with discounts for students and for groups of 10 or more. To just visit the trails, the price is $10 for foreigners and $2 for nationals. For more information, call 2659-1551.

During your visit to Barra Honda National Park, stop by Café Kura, a colorful café owned by a German lady named Andrea S. All of the food is prepared in advance, so you don´t have to wait for your order. The café specializes in homemade ice cream, cakes and empanadas, as well as offering smoothies, milkshakes, fresh juices, coffee and cappuccino.

Café Kura, which opened in June of 2011, was rated number one in the Nicoya area on Trip Advisor. Andrea believes one of the things that sets her café apart is the personal style with which she interacts with clients, talking to them and offering them information and advice. She also sells souvenirs, including jewelry made by local women in El Flor, as well as ceramics and T-shirts.The café is located 700 meters before the park entrance on the right-hand side and is open from 11 a.m. to 5 p.m. daily.

QCOSTARICA - Osta Rica has been the epicenter of regional diplomacy in recent days. The successive visits of the Secretary of State of the...
Photos of Costa Rica