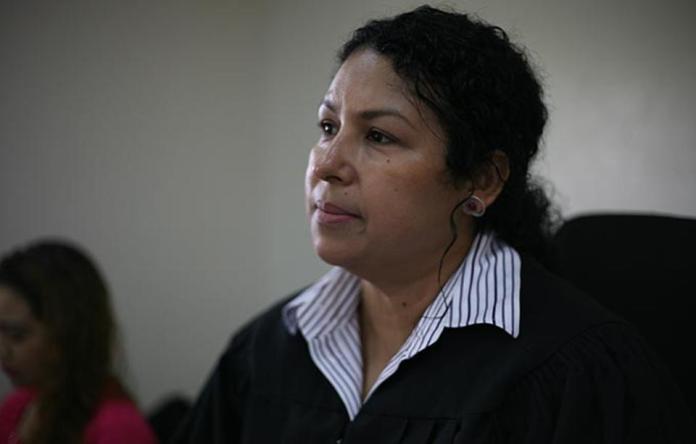 ESTELI, Nicaragua – At only 19, Michelle Zeledón, from the north of Nicaragua, has been through a lot. She watched her father beat her mother, and endured years of his verbal abuse.

“One time, during the Holy Week, my dad tried to kill my mother,” she told UNFPA. When she became pregnant at age 15, he cut off all support.

Her mother, Mayra Cabrera, sued for financial support, but her father refused to pay.

“He then countersued my daughter to avoid paying child support and cut her off, claiming he no longer had a relationship with her because she had become pregnant and had a baby,” said Ms. Cabrera.

“That sent me into a depression,” Michelle told UNFPA. But she refused to give up. “I finally decided I had to get back on my feet for my daughter and I shouldn’t back off, so I went back to school.”

Withholding financial support is considered economic violence; it can result in severe deprivation and desperation. Alba Luz Ramos, President of the Supreme Court of Justice, described it as “one of the most frequent forms of violence.”

“What we see is that men have a tradition here of not giving food to their children, and it is their obligation,” she said. Under article 316 of Nicaragua’s Family Code, underage children are entitled to support – up to age 21 if they are in school.

Michelle’s case made its way through the court system.

Eventually it landed before Yorlin Matamoro, a district family court judge in Estelí. She ruled in Michelle’s favour.

“I weighed the elements of the case, but always with a focus on the adolescent girl, because the fact that she is a mother doesn’t mean she is not entitled to child support from her father,” she said.

“It is important to reduce discrimination against women and, in this case, I found there was a clear attempt to limit a mother’s right,” Judge Matamoro added.

An education for judges

Not long ago, a judge might have felt differently.

Violence against women and girls is tragically commonplace. In Nicaragua, nearly 40 per cent of women have experienced violence from a partner or ex-partner, according to a 2011-2012 survey.

Yet in this country and elsewhere, women and girls are blamed for their own vulnerabilities – and even their own victimization. Girls who become pregnant are often thrown out of the home or economically abandoned, as Michelle was.

But a legal education programme is working to change these attitudes among those with power: judges, magistrates and legal advisers.

Yorlin Matamoro was one of more than 100 judicial professionals to graduate from a master’s degree programme in Law and Human Development from a Gender Perspective in Civil Law, part of the specialized ongoing education programme.

The UNFPA-supported programme offers an innovative educational experience, bringing in human rights and gender equality concepts from international instruments such as the Convention on the Elimination of all Forms of Discrimination Against Women and the Convention of Belem do Para.

It also includes workshops that help participants explore their own experience of gender, as well as their own expectations and preconceptions. It then encourages them to share their experiences, and to analyse social issues from this perspective.

Many graduates said the programme was eye-opening. “It facilitates a better understanding, a sincere and deep reflection,” said one participant.

“It was a time that united us in the same feeling, with a lot of respect, solidarity,” said another.

Experts in the justice system also say the approach is effective.

“We know that all the participants in the programme had real introspection and experienced significant changes in their personal, relational and social lives that, without a doubt, translate into a higher level of empathy towards the users of the justice system,” said Yadira Centeno González, a magistrate and member of the Judiciary’s Gender Commission.

The master’s degree course takes one year to complete. It includes the participation of professors from Mexico, Nicaragua and Spain.

Graduates receive a certificate from the Institute of Public Law of the Rey Juan Carlos de España University. The university prepared the curriculum, while UNFPA provided a technical review of its content.

Support for the programme will continue in 2018, reaching even more judges and legal professionals.

“After the master’s degree programme, I understood that if we don’t acknowledge women’s particular circumstances, I don’t know who will,” said Judge Matamoro.

- Advertisement -
Paying the bills
Previous articleU.S. at a Crossroad as It Confronts Turmoil in Honduras
Next articleAnti Abortion Group Gathers In Prayer Outside President Solis’ Home