If  you have read any of the books or movies in the highly-popular science fiction series Jurassic Park, you probably realize that the plot supposedly takes place in Costa Rica. The film centers on Isla Nublar near Costa Rica’s Pacific Coast, where a billionaire philanthropist and a small team of genetic scientists have created an amusement park of cloned dinosaurs. Said island is fictional and does not exist. 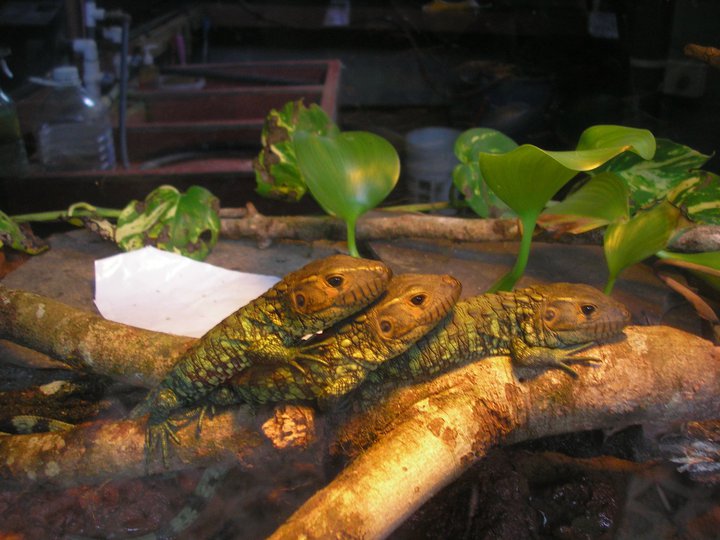 There is also another inaccuracy in the first Jurassic Park movie. Jurassic Park’s chief computer programmer, Dennis Nedry steals dinosaur embryos with the purpose of selling them. There is a scene where Nerdy is negotiating the sale at the beach that is suppose to be San José, Costa Rica.

Every knows that San José is located in the country’s Central Valley and not on the coast. Despite these fictional elements in the movie, believe it or not we do have a kind of Jurassic Park in Costa Rica.

Located 25 minutes from the city of San Isidro de General, on the way to Dominical Beach, is Parque Reptilandia. It is Costa Rica’s largest and most diverse reptile exhibition. Guided tours are offered where retirees and others can learn all about reptiles. The park boasts over 50 glass fronted terrariums and pools that take advantage of natural light and rainfall of the area.

It houses more than 65 species of reptiles and amphibians and features a myriad of creatures from petite poison dart frogs to enormous lizards and snakes. Guests can even get a glimpse of the Mexican beaded lizards, eyelash pit vipers, terciopelos (Fer-de-Lance) and giant boa constrictors. In addition, the park features smaller species like the Jesus Christ lizard that can skim across the surface of water so as to appear to be walking across it.

The star attraction is a fearsome-looking Komodo dragon, the world’s largest lizard. With a body spanning nearly eight feet in length, the Komodo gives the impression of a modern-day dinosaur.

Every Friday is feeding day. Many people are surprised when the see the way snakes eat. They consume several rats once a week because their metabolism can only process food when the weather is very warm. One of the most impressive species is the Olive Python from New Guinea which is not poisonous. It feeds on whole chickens because of its large size and humungous appetite.

Visiting Reptilandia is an example the 100s of activities available for expatriate retirees to stay busy and keep happy in Costa Rica.

Reptilandía is open to the public 7 days a week. For additional information Tel: 2787-8007 E-mail: reptilandia_cr@racsa.co.cr, www.crreptiles.com. You can also get Reptilandia by traveling on the new Costal Highway or costanera and turning left just before the bridge at the Barú River near the villiage of Dominical.

QCOSTARICA - The Caja Costarricense de Seguro Social (CCSS) says that its hospitalization figures for serious covid-19 patients are in the red. In a statement ...
Trends

There’s no one out there that doesn’t love the sense of adventure that comes with exploring a new place. Whether you’re planning a short...
Consumption

QCOSTARICA - At the press conference from Casa Presidencial that started more than 15 minutes this afternoon, the government announced new sanitary measures that...
Health

QCOSTARICA - Sunday night, 432 of the 1,188 covid patients in hospital are in Intensive Care Units (ICU), after suffering complications from covid-19. In the...
News

QCOSTARICA - Caja patients with diseases other than covid-19 will be transferred to private hospitals, to make room for covid patients, through the "Urgent...
Vaccine