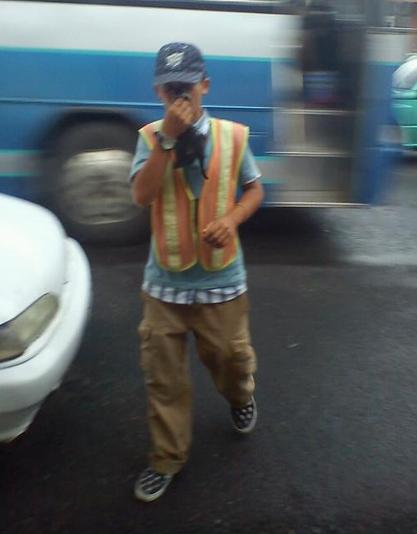 The Wachiman or Cuidacarro in Spanish refers to someone who looks after your car while parked on a public street.  It can also extend to watching your car while in the restaurant parking, local shopping centre, etc. 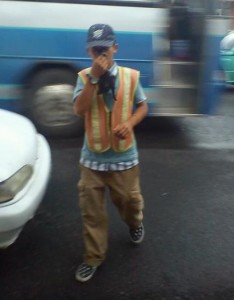 By and large the Wachiman is an independent that you entrust with your vehicle while dining, taking in a show, a soccer game or concert at the stadium or whatever.

With the exception if a small few – very few – Cuidacarros are a pest in almost every street in urban areas across the country. They “autoconcession” (licence) themselves, staking out a stretch of curb of a public street and set rates depending on what they can get.

Some, with or without the permission of the property or business owner, set up shop outside the restaurant, strip mall, etc and charge you for watching your car in the parking lot – not a public street. In many cases we feel that this is service provided by the business. Just try to make a complaint when your car is broken into or missing altogether.

In some areas like around the national stadium in La Sabana and the Teatro Nacional in the centre of San José they Wachiman charge up to ¢5.000 colones. In fact, there are some who earn up to or more than ¢500.000 colones (US$1.000) a month, making the practice a very lucrative business, especially since it is all cash and tax free.

For the services of the Wachiman there is no standard set rate. No tariff like for other public services. Not even a concession or license requirement. For a Watchiman to set up shop all he (almost every Watchiman is a man) has to do is don a reflective vest and stake out a curb.

Since there is no legislation to regulate the practice and the municipalities fail to provide proper and secure street parking, the Wachiman applies his trade while municipalities close a blind eye and deny there is a problem.

Some Wachimen are have hutzpa, even handing out a card with “his” rate on it. And choosing not to pay, well it could mean disaster. Not to say that even if you do pay your car and their contents are safe from the criminal elements, just not this one, you hope.

There have been some attempts to regulate and license the practice. The last was some time back by legislator Carlos Avendaño who proposed a draft law, however proving to be ineffective in getting approval from fellow legislators and ending up being filed away in the archives of the Legislative Assembly.

If the municipalities, led by the Municipalidad de San José, had the cojones they could completely eliminate the problem by providing effective and secure off street parking. They, the municipalities, could seek lasting solutions and eradicate what has become a plague on the streets of Costa Rica.

I do not have figures, only my personal experiences with the Cuidacarros, whom I have found for the most part to be indigents, people who at other times we scoff at for sleeping on the sidewalk or from the stench of alcohol while strolling the Avenida.

Over the years, the watching of cars has evolved to the point that car owners are now extorted. It is impossible to leave your car anywhere, save in front of your house (maybe) without someone sticking their hand out to watch it for you.

Across from Plaza Mayor, in Rorhmoser, the Wachiman has even painted parking space lines on the public street, uses various objects to block off (reserve) spaces for what I can only guess are monthly clients of the office workers at the Citibank and Scotiabank offices. This Wachiman operates only during the weekdays and only during business hours.

Due to the failure of municipalities, the lack of parking lots nearby, street parking is the only alternative. In the downtown areas of San José, Alajuela, Heredia and Cartago, for instance, it is better to entrust the Wachiman with your car than to risk having to walk blocks in the dark and insecure streets to get to and from the parking lot.

My point to all this is not to complain and whine, rather to offer a solution.

There is a law, the “Ley de Servicios de Seguridad Privada” (Law of Private Security Services). This law serves a sensible set of requirements, which provides that the Watchiman obtain a similar permit to that of the private security guards, thus be registered with the Ministerio de Seguridad Publica, which vets for a criminal history.

For the few honest and honourable cuidacarros – and they do exist – this should not be a problem. Those who are serious about their work and deserve to be remunerated should have no problem with the requirements, in fact they should be the ones pushing for regulations.

Licensing could also mean establishing a tariff, even a minimum like the taxis, at say ¢500 colones (a buck). The owner of the vehicle can then give (pay) more. The regulations could allow extras like for longer periods of time, for location and for available curb space.

The regulations could then have a mechanism for customer complaints. In the case of outright criminal activity the Penal Code kicks in. All this can be handled by the local municipalities. They could regulate the hours, the rates, the locations, etc, etc, etc.

And although it may not solve the problem definitively, it has to start somewhere, while municipalities start creating proper off street parking like a real city should.

Only my opinion. If you agree (or disagree) leave your comments.

In the meantime, here’s wishing you a Happy New Years and all the best for 2013.
Enrico Cacciatore
Chief cook and bottle washer at the Q!