Keep Your Mind Young With Brain-Teasers

This past Saturday was the final date of the Rompementes (Brain Buster) Tour, a traveling exhibition conceived by Luis Alfonso Dominguez Carballo, Professor Emeritus of the Faculty of Physics of the University of Sonora. 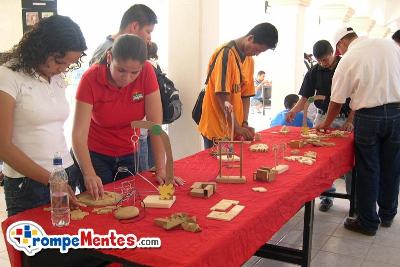 The Rompementes tour was billed as a scientific exhibit, but it mostly consisted of amusing brain-teasers with a learning angle, such as impossible holograms, gravity-defying toys, practical physics experiments, math riddles, and other seemingly amazing feats of mental aerobics that have a didactic explanation. People, especially kids, had a lot of fun at Rompementes’ final date in Costa Rica at the Morazan Park, which also featured music by national reggae fusion band Ojo de Buey. This event was also sponsored by Enamorate de tu Ciudad (Fall in Love with Your City), an initiative by the Ministry of Culture and Youth in Costa Rica to showcase family activities in San Jose.

Although children are usually better at solving these delightful puzzles, some of the attendees at Rompementes asked the exhibitor about the benefits of such brain-teasers for patients who suffer from Alzheimer’s disease and dementia in Costa Rica. According to the latest statistics published by the World Health Organization, 377 people in Costa Rica died from the degenerative effects caused by Alzheimer’s disease in 2010, which represents 2.3 percents of all deaths that year.

Although Alzheimer’s disease in Costa Rica has not reached epidemic proportions, such as it has in China, reports of this fatal condition are on the rise in our country. There has been a lot of research, as well as speculation, about whether an active mind can effectively prevent the onset -or at least the severity of Alzheimer’s. Researchers in the 21st century have found that mental fitness associated with crossword or Sudoku puzzles can help prevent memory loss, which is one of the symptoms of Alzheimer’s. In some cases of dementia and deep memory loss, the brain is aging faster than the body. Brain-teasers help keep the mind young, which is always a good thing.

The good news for expats who choose to enjoy their golden years in Costa Rica is that learning Spanish, or any other language, can help them stave off Alzheimer’s. As far as solving puzzles such as those on the Rompementes tour, well… they may be difficult for patients who suffer from advanced stages of Alzheimer’s. If you have not been diagnosed with Alzheimer’s, or if you are in the lower stages, specialists recommend that you challenge yourself mentally to the max of your cognitive abilities. But, if you are caring for a loved one with advanced Alzheimer’s, get them to solve simple puzzles from about 10 to 50 pieces, that are also colorful and serene. Super-simple online brain games such as the ones developed by Lumosity can also help in this regar

Alzheimer’s is a terrible disease, but it can be prevented to some extent with the right balance of mental and physical exercise, as well as with a healthy nutrition.

QCOSTARICA - Costa Rica's economic activity registered in April 2021 a year-on-year growth of 8.8%, a figure affected by a “base” or “rebound” effect,...
Trends

TODAY NICARAGUA – The Nicaraguan government assures that the imprisoned political opponents detained on charges of “inciting foreign intervention” are “usurpers” financed by the...
Peru