Arsenal, Liverpool and Everton are all keeping an eye on Costa Rica’s goalkeeper extraordinaire, Keylor Navas,  for his impressive performance Sunday penalty shoo-out win and his overall performance so far in World Cup play, 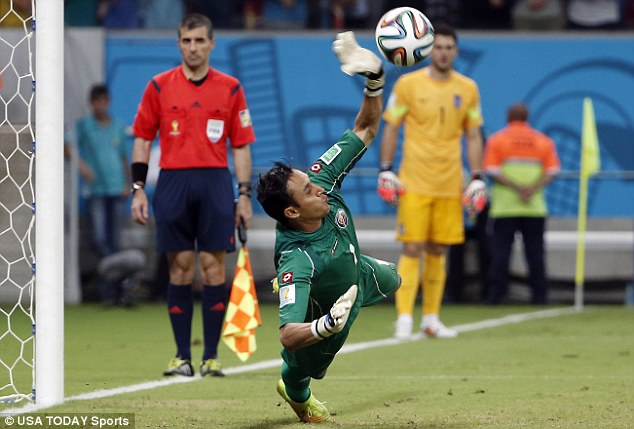 Navas as the hero Sunday. His goalkeeping kept Greece from advancing, as with the Ticos, for the first time to the quarter-finals.

“We left our fear at home, explained Navas. “That is why we came through a group that had three former World Cup winners in it. We are not afraid of anyone.”

Navas is now the World Cup’s most wanted goalie. The Spanish club Levante will probably be unable to keep their star whose contract runs out in one year.

At 27, Navas is one of the key players at the forefront of the Ticos surprising success in the World Cup so far. Born in San Isidro (Perez Zeledon), Costa Rica, he got his big break when he left Saprissa to join Albacete. After just one appearance against Athletic Bilbao, he eventually joined Levante on a permanent basis for US$200.000.

Standing at 6ft with a slim frame, Navas is one of the smallest goalkeepers around, but he makes his presence felt in the penalty area. An agile, energetic stopper, Navas loves nothing more than a fingertip save for the cameras.

TODAY NICARAGUA – The vice president of Nicaragua and First Lady, Rosario Murillo, assured that those who feel persecuted are for the crimes they...
Peru

QCOSTARICA - The Ministry of Health issued a new guideline on Thursday that establishes the requirements to request the vaccination certificate against covid-19 in...
Economic Recovery