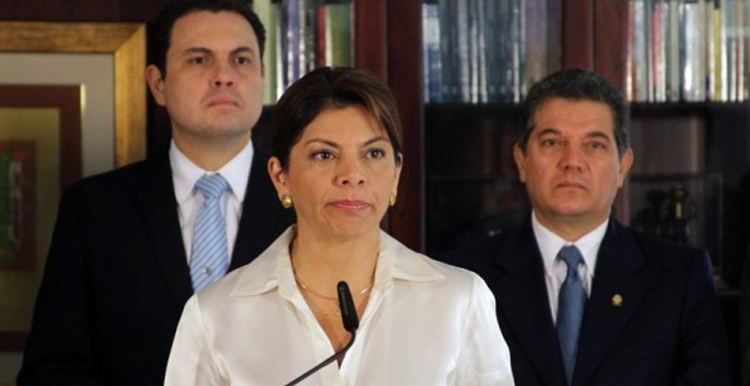 With only two weeks left in their mandate, the legislative Comisión de Ingreso y Gasto Público (Committee on Revenue and Public Expenditure) has filed away (closed) the investigation into Presidenta Laura Chinchilla and other public official use of a private plane allegedly linked to drug trafficking.

The closing of the investigation also lets off the hook from any liability those responsible for the planning of the trip, who have said all along they acted in “good faith”.

“We felt the case should be closed, first because the committee did not have the power to start an action of this type and second that the Fiscalía (prosecution) had already dismissed the case against Irene Pacheco and Mauricio Boraschi, who are persons of impeachable character who acted witout malice”, said legislator Annie Saborío.

Irene Pacheco was Chinchilla’s private assistant and was fired for having made the contact and the arrangements for the plane, while Borachi was head of the Presidenta’s security.

Last May, Presidenta Laura Chinchilla travelled to Perú, to attend the wedding of the son of Costa Rica’s vice-president Luis Liberman. During the trip, Chinchilla met briefly with Peru’s president.

The trip caught the attention of the media when Casa Presidencial announced the flight after the wheels went up. Traditionally, any trips by the president(a) are made public hours to days to weeks ahead, but never after leaving the country.

The trip turned into a scandal when it was learned that the owner of the plane, a Cessna jet with the tail signs N93CW, belonged to THX Energy, a company controlled by Colombian Gabriel Ricardo Morales Fallon, with alleged ties to Colombia’s drug traffickers.

This was not the first time Chinchilla had used the plane, and as we learned at no cost to her or the state. Travelling with Chinchilla were her husband, José Marís Rico and Francisco Chacón, his wife Foreign Trade Minister Anabel Gonzalez Pacheco.