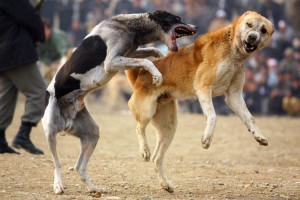 The ban is on dog fights across the country, both private and public, resulting in abuse an injury to the animals.

The draft legislation doesn’t stop just at dog fights, it bans all types of abuses or activities that can lead to the dog being injured, including where a dog is forced to pull heavy weights.

The ban also includes possession or distribution of material related to dog fights. The exception is if the material is used for educational programs. The sale of dogs for dog fights is also prohibited in the proposed legislation

The penalties is stiff, a maximum  of ¢15 million colones (US$30.000 dollars).  The draft law also calls for a prison sentence from six months to three years for the causing the death of a dog involved in a dog fight. However, no one will actually do prison time, the sentenced will be automatically commuted to probation.

Spectators attending dog fights can be ordered to 150 hours of community work.

The draft legislation now needs to go before the full legislature for approval.

QCOSTARICA - Good news for Ticos with traveling fever! From Friday, June 25, Germany will allow entry of travelers from Costa Rica as long...
Nicaragua