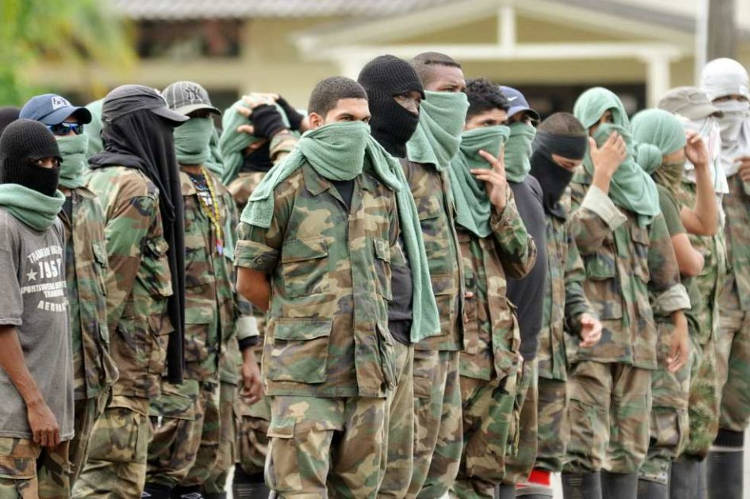 A shipment of 445 kilos of cocaine from Colombia headed for Costa Rica belongs to the “Los Urabeños” paramilitary group, according to Colombian authorities.

Last Friday, Ricardo Londoño Restrepo, director of the Anti-Narcotics Directorate in Colombia, reported that the shipment seized in a container in Santa Marta, in Colombia’s caribbean coast, was heaed for the Port of Moín in Costa Rica, also in the Caribbean.

The drugs were located inside a container loaded with white cement, packed in 17 bags with 25 rectangular packaged marked with a symbol.

Costa Rican authorities say they are unaware of the existence of the group, as confirmed by Francisco Seguro, director of the Organismo de Investigación Judicial (OIJ), to CRHoy.com.

However, the group has been widely reported in the Colombia media, a group focusing on the transfer of illegal drugs into Mexico by way of Central America.

“Los Urabeños”
Los Urabeños, also known as the Gaitanista Self-Defense Forces, are one of the most ambitious, ruthless and aggressively expansionist of Colombia’s drug trafficking organizations. One of a number of groups made up of former mid-level paramilitary leaders, they have caused homicide rates to skyrocket wherever they have appeared.

While their power base is in the provinces of Antioquia, Choco and Cordoba, they have been expanding their presence in La Guajira, Cesar, Santander, Valle del Cauca and in major cities including Medellin and Bogota.

The Urabeños bring a military discipline to their operations, and are well consolidated on the Caribbean coast, contracting local street gangs to act as informants, hit men or drug distributors. Through this disciplined approach and by avoiding infighting and paying their recruits well, the group has gained an edge over the Rastrojos, their biggest rival.

Origins
The Urabeños take their name from Uraba, a northwestern region near the Panamanian border highly prized by drug traffickers as it offers access to the Caribbean and Pacific coasts from the departments of Antioquia and Choco. However, the origins of the group can be traced elsewhere, to Colombia’s Eastern Plains, where Daniel Rendon Herrera, better known as “Don Mario,” once handled finances for the paramilitary group the Centauros Bloc.

Cocaine traffickers had long competed with the Revolutionary Armed Forces of Colombia (FARC) for territory and influence in the Eastern Plains. In 1997, top paramilitary commanders Carlos and Vicente Castaño of the United Self-Defense Forces of Colombia (AUC) began sending troops to the area in order to co-opt the drug business from the guerrillas. In 2001, the Castaños sold the Centauros Bloc to another warlord, Miguel Arroyave, allegedly for $7 million. It was Arroyave who convinced Don Mario to come and work for him.

Under Don Mario’s supervision, the Centauros became one of the wealthiest factions within the AUC. The Centauros trafficked cocaine, propped up local politicians, extorted ranchers and farmers, and collected security taxes for products ranging from alcohol to petroleum.

But the Centauros soon began clashing with a rival paramilitary group, the Peasant Self-Defense Forces of Casanare (ACC). The ACC was one of the oldest vigilante groups in Colombia, headed by Hector Germán Buitrago Parada, alias “Martín Llanos.” It was allegedly ACC fighters who first began calling the Centauros “those from Urabá,” “Paisas” or “Urabeños,” all references to the Antioquia region where many of the paramilitaries hailed from.

By 2004, the fierce war between the ACC and the Centauros had left an estimated 3,000 people dead. Don Mario fled the Eastern Plains in June after a falling out with Arroyave, finding refuge in the Uraba region, where his brother Freddy, alias “El Aleman,” headed his own paramilitary group, the Elmer Cardenas Bloc. Shortly afterwards, Arroyave was ambushed and killed by his former allies, including Pedro Oliveiro Guerrero, alias “Cuchillo.”

When El Aleman chose to demobilize in 2006, his brother Don Mario seized the opportunity to expand his drug trafficking operations in the Gulf of Uraba. He recruited many of the fighters once under Freddy’s command, as well as ex-members from the defunct Popular Liberation Army (EPL) guerrilla group. From Uraba, the criminal group deployed go-fast boats loaded with cocaine to Central America or the Caribbean, with some estimates putting it at 10 to 20 boats per week. By 2008, Don Mario was one of the richest and most-wanted traffickers in Colombia.

Don Mario attempted to expand his empire, moving into southern Cordoba province, the Lower Cauca region in northern Antioquia and even venturing into Medellin, long controlled by the feared Oficina de Envigado. His men soon began clashing with the Paisas, then a rural, armed wing of the Oficina. Police blamed Don Mario’s organization for at least 3,000 homicides between 2007 and 2009. On April 15, 2009, a team of 200 police commandos captured Don Mario on a farm in rural Uraba.

Following his capture, the remnants of Don Mario’s organization fell under control of the Usuga brothers, Juan de Dios, alias “Giovanni,” and Dario Antonio, alias “Otoniel” two former mid-ranking paramilitaries believed to have worked with Don Mario since the 1990s. The two started out with an estimated 250 men and have since managed to grow exponentially.

On January 1 2012, Juan de Dios was killed in a police raid on a ranch in the department of Choco leaving Otoniel in charge. In a surprising display of strength, the Urabeños shut down the much of the northern region by declaring an “armed strike” in protest against his death, handing out fliers which referred to the group’s former name, the Gaitanista Self-Defense Forces. The Urabeños also signaled their intention to respond aggressively to their leader’s death when they publicly offered a $1,000 reward for each police officer killed in Antioquia, a public relations strategy best associated with kingpin Pablo Escobar.

Modus Operandi
The Urabeños rely on at least 1,200 members in their top level of command. Their base is near and around the Uraba gulf, including the Tierralta and Valencia municipalities in Cordoba and the eleven municipalities in the Uraba sub-region in Antioquia.

The top command deploys teams of trained, armed men to rural areas vital for drug-trafficking operations. Once established, the cells then attempt to recruit local informants, especially collaborators who can inform them of the actions of the security forces. These include zones with natural sea ports along the Caribbean coast, or areas where coca base must be bought, like Caucasia or Taraza in Antioquia.

The Urabeños are also known to contract local street gangs who help with micro-trafficking, extortion and assassination. By “sponsoring” other low-level gangs, the Urabeños have been able to maintain small, select cells of highly disciplined men in the field, responsible for ever larger swathes of territory. This is the tactic they have been employing in Colombia’s second largest city Medellin, where they have been fighting a proxy war against the remnants of the Oficina de Envigado by moving into new territories and contracting local gangs known to turn against the Oficina and the gangs that remain loyal to them. There are also indications that the group has been successful enough in terms of recruitment to move into other key territories like Barrancabermeja, Santander, one of Colombia’s oil towns long prized by the rival Rastrojos.

When it comes to drug trafficking, the Urabeños are similar to rival groups like the Rastrojos or the Paisas in that they are uninterested in controlling the entire chain of drug production. But they have not proved as adept as the Rastrojos when it comes to brokering key alliances with other major players in the drug trade. The Urabeños will buy coca base from the FARC, but the two groups will not collaborate much further than that. What is helping the Urabeños compete is their military discipline: so far they have proved immune to the kind of infighting tearing apart the Paisas or the Oficina.

The Urabeños have also recently expanded their influence in illegal mining operations, especially in Antioquia where they reportedly negotiated the purchase of mining interests from the Rastrojos. They are heavily into extortion, and areas under their control demand protection money from a variety of sources ranging from businesses to school children.

In 2012, the Urabeños reportedly made a non-aggression pact with rivals the Rastrojos and the Paisas, although this did not stem the violence in many of the areas disputed by the groups.

What’s more, their presence is expanding as their allies fall. With the Rastrojos reeling from a series of key losses in 2012, the Urabeños successfully made a push into the southwest Valle del Cauca province, a Rastrojos stronghold that includes the key trafficking seaport of Buenaventura. The fall of key leaders in Caribbean organization the Giraldos, with whom the Urabeños have been involved in an ongoing turf war, in early 2013 also opened the way for the Urabeños’ expansion.

However, the Urabeños have also suffered some setbacks in their continuing turf dispute with the Rastrojos in Cali, in the Valle del Cauca department, with key leaders Greylin Fernando Varon Cadena, alias “Martin Bala,” and Orlando Gutierrez Rendon, alias “Negro Orlando,” captured in May 2013, and an important Urabeños ally, Hector Mario Urdinola, alias “Chicho,” arrested in January.