The beginning of December is an exciting time in Costa Rica. Children get out of school for summer vacation, the four month long rainy season comes to an end, and it is the beginning of the season of Navidad.

During the Christmas season Costa Ricans, or Ticos as they are affectionately known, enjoy a multitude of parades, fiestas, and traditional customs.

The Christmas season in Costa Rica is splendid with most homes and business decorated with Christmas lights. The majority of families decorate their homes with beautiful tropical flowers, fragrant cypress Christmas trees and wreaths, branches of coffee shrubs with their red berries and the most important of all, the portales or nativity scenes. As in most Latin American countries the main religion is Roman Catholicism, so the portales are typically the focal point in the home. The portales have the typical models of Mary, Joseph, the wise men, the ox and the mule. In addition to the typical nativity figures, people often add other models such as houses and lots of different sorts of animals to create miniature villages. One religious belief is that only families who own their homes can purchase a portal. Those who rent their homes use portales given as a gift in hopes that someday the Holy Family will help them to purchase a home.

In early December, in the true spirit of Christmas the season begins with the annual Telethon, forty-eight hours of concerts established to raise funds for the Children’s Hospital. The Children’s Hospital Christmas tree lighting ceremony is a nationwide representation of the holiday season in Costa Rica and a profound experience for its hospitalized children. The tree is arrayed with more than 25,000 multicolored lights and crowned with a star. This ceremony fills the hearts of Ticos with the Christmas spirit. Parents bring their children to take part in the event which includes live theatrical performances, the Children’s Chorus singing Christmas carols, clowns and other children’s activities.

The Festival de la Luz, or the Festival of Lights, the most popular of Christmas parades in all of Costa Rica kicks off the holiday season each year on the second Saturday of December. Elaborately illuminated floats, marching bands, balloons, fireworks and performing artists begin on Paseo Colon and progress to Avenida Segunda and Plaza de la Democracia. There are typically hundreds of thousands of people lining the parade route. This event ensures that everyone is feeling the festive spirit of Christmas as it is televised on multiple Costa Rican networks so no one misses it.

The numerous parades and festivals include Avenidazos a series of cultural events along the boardwalk of Calle Central with carefree walking in a traditional gaily lit, festive atmosphere perfect for people watching, window shopping, enjoying free live concerts and Christmas ceremonies.

Fiestas de Zapote are very popular. During the day there are carnival rides, Toros a la Tica or bull fights Costa Rican style and street food vendors. After the sun goes down, beer gardens, a huge high-tech disco and bar built just for the Fiestas light up the night with their neon lights and crank up the volume for one of the most boisterous annual celebrations. 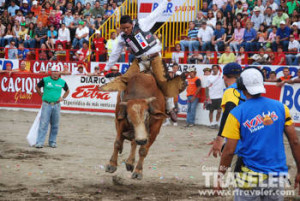 Toros a la Tica, are the wildly popular Costa Rican bull fights. The spectators, who are of dubious states of sanity “run with the bulls” with great hilarity. The bulls are never harmed but it is not unusual for a bullfighter to be injured in their raucous recreation.

Costa Rica’s Christmas food is one of the most anticipated traditions. Christmas menus are extensive but many families focus on the preparation of typical Costa Rican tamales. The Costa Rican tamal is made of a ground corn dough that is filled with small portions of rice, vegetables, potato, olives and pork, beef or chicken. The tamales are then wrapped in banana leaves and tied up with string in pairs called piñas and boiled until completely cooked. Each family has their own tamal recipe that has been passed down by abuelas grandmothers for many generations. Making tamales is a treasured tradition involving friends and family members in an affectionate family assembly line. Costa Rican tamales are a favorite festive delicacy enjoyed on Christmas Eve.

On Nochebuena or Christmas Eve everyone goes to Misa de Gallo or Rooster Mass then returns home for Christmas Eve dinner. The Costa Rican Christmas Eve dinner typically includes hornado roasted pork leg, tamales, salad, and rice or mashed potatoes. The favorite beverage is eggnog spiked liberally with rum. The traditional dessert is queque navideño Christmas cake, a fruitcake that is similar to pound cake and infused with rum-soaked dried fruit. The cooks soak their fruit in rum for weeks, and frequently tease about its alcoholic potency. 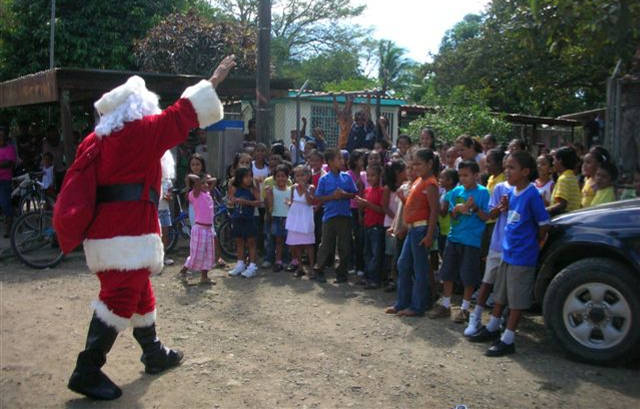 The season of Navidad is important to Costa Ricans as evidenced by their plethora of festivals, parades, ceremonies and customs. Each of the delicious treats, raucous fiestas, religious symbols and ceremonies and charitable activities has deep meaning to Costa Rican families celebrating the Christmas season.