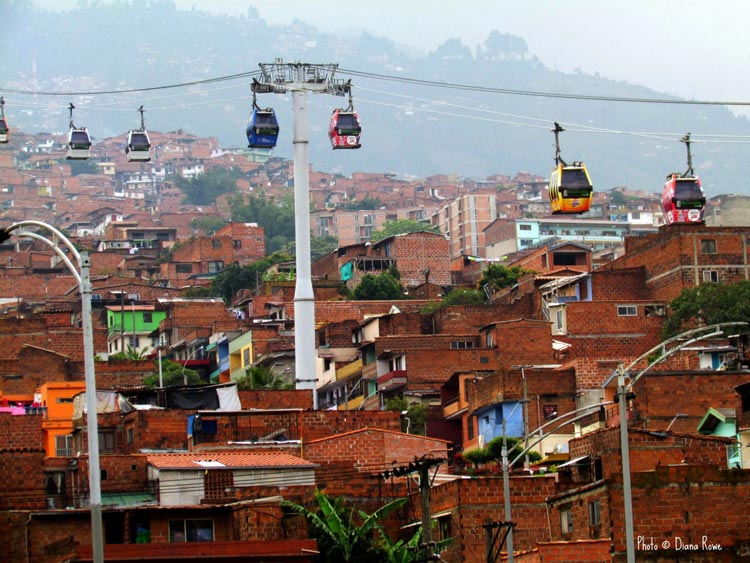 TODAY COLOMBIA – Residents of Medellín’s poorest slums used to be suspicious of strangers. Who in their right minds would be wandering the winding steps up the steep slopes of their neighborhoods, controlled by local criminal gangs so violent that even police feared to go there?

Medellín flaunted its makeover as it hosted UN Habitat’s World Urban Forum with tours of futuristic schools and libraries, parks and city cable cars – but some old problems remain

Today, the people of the Santo Domingo-Savio neighbourhood have become accustomed to a steady stream of outsiders. 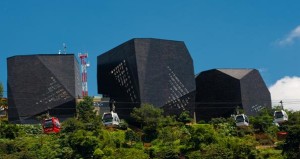 The visitors arrive on the cable car public transport system, stroll past modest brick homes and visit the España Library and Park – a potent symbol of the Colombian city’s much lauded transformation from murder capital of the world to model of urban social integration.

Last week, hosting the UN Habitat’s World Urban Forum on the future of cities, Medellín organized tours to the schools and libraries, parks and transportation infrastructure that are the most visible signs of the change.

The city has earned its bragging rights. Once home to the world’s most notorious and violent drug cartel, headed by Pablo Escobar, Medellín witnessed 6,349 killings in 1991, a murder rate of 380 per 100,000 people. The rate has since fallen more than 80%, thanks in part to a string of innovative mayors who laid out plans to integrate the poorest and most violent hillside neighbourhoods into the city centre in the valley below.

A cable car system, linked to the modern and spotless metro, moves tens of thousands of hillside residents each day, dramatically cutting commuting times to the city centre. Futuristic-looking libraries and schools have been set amid the makeshift homes of the underprivileged. And after decades of having to climb hundreds of stairs to their homes, residents of the Comuna 13 district can now ride an escalator 1,300ft up.

It’s not just transport: education, social programs and participatory budgets have all been leveraged to transform the lives of the most underprivileged residents in this city of 2.2 million. “The idea has been to bring institutions closer to citizens,” mayor Aníbal Gaviria told the forum.

Arley Palomino, 18, says he remembers when just walking to school was an act of bravery. Firefights between gangs could break out at any time. “We were isolated here. The police wouldn’t even dare come,” he says, lounging under a leafy tree next to the España Library with a small group of secondary school students, lulled by the steady hum of cable cars and the heat of the day.

Since the MetroCable system was built in 2004 and the library in 2007, things have changed, Palomino says. The gangs are still around but the random violence is gone, he says. There is a constant police presence and residents feel proud of their neighbourhood.

“It is in areas that are most abandoned that there is more violence,” says Palomino, who plans to study semiotics at the University of Antioquia. “Today we are no longer abandoned here.” He sweeps his arm toward the España Library.

While that library is a symbol of integration, it also bears the signs of the city’s fragility: chunks of plaster are falling from the walls and the facade is in need of major repairs. “Medellín is still a laboratory,” says Jorge Melguizo, an urban planning consultant who headed the city’s civic culture and social development programmes from 2004 to 2010. “It continues to be a very fragile city, and insecurity is still a major problem.”

One person who knows that very well is Ramon Carrasco. Every day, he crisscrosses the neighbourhood of San Javier and Vallejuelos selling mazamorra, a traditional corn-based drink that he makes at home. He fled his hometown in the Uraba region of Colombia to join the ranks of Colombia’s 5 million internal refugees. Many of them populate Medellín’s slums.

Though a MetroCable line cuts through here and there is a police presence, Carrasco says it’s still gangs that call the shots. The chances of being hit by a stray bullet are much lower than a few years ago, but he is often forced to offer a “contribution” to gang leaders to be able to sell his mazamorra in certain areas. Security analysts say such “micro-extortion” is rampant in Medellín, affecting everyone from shop owners and schoolchildren to bus and taxi drivers.

“If a young man who is not from around here comes and starts asking questions and poking around, the gangs will nab him and see what he’s up to,” says Carrasco. “They control the area.”

Jerry McDermott, director of InSight Crime, a Medellín-based thinktank on security in Latin America, says that while nobody can deny that Medellín has made extraordinary progress over the past 30 years, the dramatic drop in homicides is not simply attributable to security measures.

“There is in effect a pax criminale between rival organisations that control the drug trafficking business in the city,” he says. “They have divided up the territory so the population under the domain of the combos (gangs) are suffering the same if not more than they ever did.” Violence, threats and forced recruitment by gangs forcibly displaced more than 5,000 Medellín residents in the first 10 months of last year, according to the municipal ombudsman’s office.

City officials recognize violence and gang control remains a problem in many areas. “But that does not detract from the positive things that have been achieved,” says Melguizo. And big plans lie ahead. The city held an international contest for the design of a vast park to line the banks of the Medellín River, which cuts through city, and buffer parks at the top edges of the city aim to limit further sprawl.

Skeptics often wonder if the “Medellín miracle” is more about show than substance. The city has certainly known how to sell itself well internationally, winning international awards for innovation and being named one of the first 33 cities of the Rockefeller Foundation’s 100 Resilient Cities project, says Melguizo.

But he argues that the most important marketing move has been to sell the idea that transformation is possible to city residents themselves. Almost everywhere you go, you can see the effort has paid off in the pride that residents feel for their city.

“Sure there are problems, but I wouldn’t live anywhere else,” says Palomino. “Here we live very well and people come from all over to see us.”