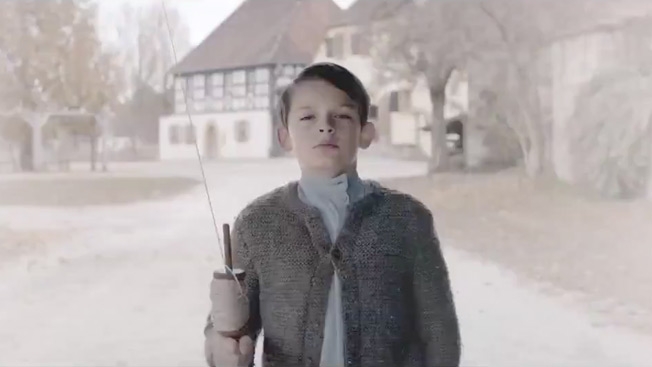 If you were a car, and you could travel back in time and kill Hitler when he was a boy, would you do it?

Well, if you were a Volkswagen, the answer would probably be no, since you’d be murdering your own father, and you’d probably cease to exist. A C-Class Mercedes-Benz, however, would suffer no such temporal paradox, and that’s the vehicle of young Adolf’s destruction in this well-made though extremely odd commercial parody, created as a thesis by some German film students.

In the 80-second clip, the driverless car avoids various kids in Hitler’s picturesque Austrian hometown but mows down young Adolf. The vehicle’s Collision Prevention Assist technology, we’re told, “detects dangers before they come up.” The final image of the school-age never-to-be-Führer lying on the ground, limbs splayed out like a swastika, is memorably intense.

Mercedes parent Daimler is understandably miffed, and forced the students to add blaring disclaimers that identify the project as a spoof. The controversy has helped the clip go viral, with almost 700,000 YouTube views since Friday. Couching the film as an ad for a real automaker also provides, perhaps unintentionally, extra layers for interpretation by bringing the global corporate/industrial/media complex into the picture.

The filmmakers—Tobia Haase, Jan Mettler and Lydia Lohse—have said they wanted to explore the morality of technology by asking what would happen if machines had souls. I wonder what the world would’ve been like had Hitler had one.

- Advertisement -
Paying the bills
Previous articleNo Intervention of Truckers Blockade at Paso Canoas
Next articleAn Anaconda in Guanacaste? Not Quite!