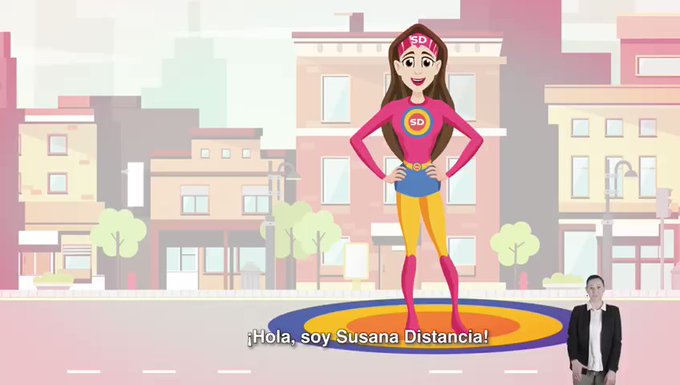 Superman, Batman and now Susana Distancia! Mexico is trying a novel approach to try and get its citizens to listen to coronavirus health advice and it looks like she’s caught people’s attention.

Mexico has invented a superhero cartoon character to remind people to keep apart to prevent the spread of the new coronavirus.

Susana Distancia, whose name means “a healthy distance” appears in a public health video in a see-through bubble wearing blue and pink clothes, reminding people to keep a safe distance of 2 meters (about 6 feet) to stop the spread of coronavirus in the country.

There have been 203 recorded cases of COVID-19 in Mexico and two deaths, according to figures from Johns Hopkins University.

The superhero went viral on Twitter over the weekend, triggering a variety of responses.

Some pointed out its government was failing to follow their own superhero’s health advice after President Andres Manuel Lopez Obrador shook hands and kissed a child at recent political rallies.

“Mexicans are used to joking whenever it is,” Ruben Dario Vaázquez, a professor of Communication and Journalism at the National Autonomous University of Mexico (UNAM), told the daily El Pais, commenting on the success of the character.

Susana Distancia is not the only social media health campaign that has proved successful. Vietnam’s health authorities released a coronavirus health advice video called Ghen Co Vy that triggered a TikTok dance challenge and has millions of views on YouTube.

QCOSTARICA - The government will present a bill to...
Trends