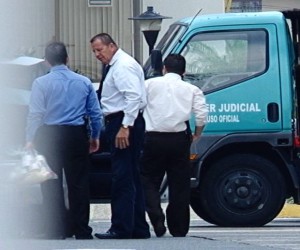 It was about two in the afternoon Monday when officials of the Ministerio Público (Public Prosecutor) raided the offices of the Consejo Nacional de Concesiones (National Tender Board).

According to a Ministerio Publico press released, the investigation is currently focusing on alleged breach of duties and that in the raid, officials took away some 200 boxes of documents related to the case.

Opponents to the US$530 million dollar contract awarded to the Brazilian company, OAS, claim a number of irregularities with the award of the contract.

Since the contract award was made public by the government two weeks ago, Presidenta Laura Chinchilla and Transport Minister Pedro Castro, have come under fire. Opposition to the contract is now more than just a group of citizens from San Ramón and surrounding areas.

Luis Fishman, legislator for the PUSC party, is the latest to join the opposition, filing a case before the Constitutional Court, alleging violation of Article 185 of the country’s Political Constitution.

QCOSTARICA - Consumer pessimism decreased slightly for February 2021, compared to November of last year, however, uncertainty around the economy remains high and the...
Greater Metropolitan Area

QCOSTARICA - Before I get into my opinion of the irresponsible actions of the immigration service and the ICT, good news for tourists who...
Heredia

QCOSTARICA - Despite losing their home entirely in December, a Heredia received electricity bills from the Heredia Public Service Company (ESPH) for January and...
Trends

Costa Rica is one of the world’s most desirable ex-pat locations and a retirement haven in Central America. The country is blessed with an...
Health

QCOSTARICA - A total of 24 travelers, so far, face problems with the law when discovered trying to leave Costa Rica, through the San...
Coronavirus

Japan is beefing up measures against loneliness, taking a first major step toward comprehensively tackling a pervasive problem in the nation that has again...
Pura Vida

QCOSTARICA - To commemorate the Bicentennial of Costa Rica that occurs in 2021, Inverse Project has designed the Torre del Bicentenario for this important...
Rico's Covid-19 Digest